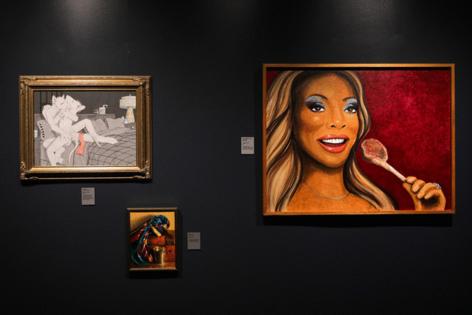 CHICAGO — A reimagined Museum of Broadcast Communications is now reopened and free to the public — including, for a limited time, a micro-gallery of three ridiculous artworks courtesy of John Oliver and HBO’s “Last Week Tonight.”

The MBC was among just five museums nationwide selected by “Last Week Tonight” to show what the satirical news magazine calls its “Masterpiece Gallery.” The art, on loan through Oct. 24, comes with a $10,000 cash donation as part of “Last Week Tonight’s” efforts to draw attention to and support ailing small museums. An additional $10,000 goes to a charity of the museum’s choice — in this case, the Greater Chicago Food Depository.

The museum used the time of its long closure to revamp its permanent exhibits and create a new centerpiece — an exhibit celebrating radio’s centennial.

Around the corner from the new “Century of Radio” hangs three paintings culled from comedian Oliver’s antics on “Last Week Tonight.” There’s an oil-on-canvas work from self-employed artist Judith Kudlow — wife of the Trump administration’s National Economic Council director Larry Kudlow — whose inclination toward painting her husband’s shirts and ties were ridiculed on “Last Week Tonight” after she applied for a small business bailout during the pandemic. Oliver made an on-air, lowball offer for her painting “Ties,” described as “a multi-chromatic installment of her career-long exploration of a world without her husband, Larry”— and apparently got it.

Flanking “Ties” are two larger paintings. “Stay up Late,” by Brian Swords of York, features two postcoital rats embracing on the edge of a bed (a jar of Ky-lubricant sits on the bedside table). Oliver’s at-home episodes were filmed against a white void; rat erotica, he said, was the perfect thing to fill in the background and he offered $1,000 (plus a $20,000 food bank donation) to the previous owner.

Then there’s a paint-on-plywood piece titled “Wendy Williams Eating a Lambchop,” depicting, well, that. Quarantine episodes of Williams’ daytime television talk show from home found her indulging on various delicacies like a Champagne glass of Orangina and the aforementioned lambchop. She gifted the portrait to Oliver in appreciation for the showering of praise bestowed on “Last Week Tonight.” Williams, who rose to fame in the 1990s as a charismatic radio host and DJ, has another connection to the museum: She was inducted to the MBC’s Radio Hall of Fame in 2009.

After closing in March 2020, MBC opened briefly that summer. Poor attendance forced the museum closed again, and they chose to focus on educational programs and an online lecture series prior to a soft reopening on Oct. 2.

Supply chain backlogs have further delayed MBC from finishing the planned revamp and two rooms, including a new exhibit tailored after their “Great Debates” educational program, launched during the 2020 election season, are yet to be finished. According to a museum spokesperson, a grand reopening is now planned for Oct. 28 in conjunction with this year’s Radio Hall of Fame induction ceremony. By then, the “Masterpiece Gallery” will have moved on to the next stop, so it’s worth it to take a gander now — that is, if weird, weird paintings are your thing.

“We’ve been cautious in opening up to make sure it’s worth our while,” said Susy Schultz, “and to also make sure that we have something people want to see.”

Schultz who had been MBC’s executive director for just over two years and had been charged with transforming the museum more toward education, stepped down soon after the Tribune spoke to her in late September. Jim Carlton, a member of the museum’s board of directors, was named interim executive director.