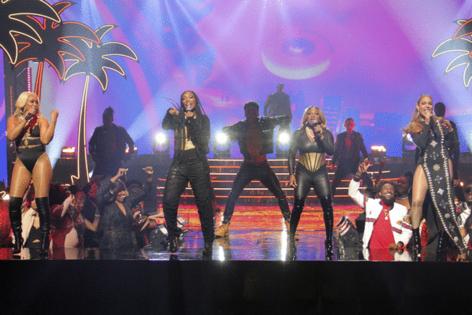 The ‘90s are making a comeback — with a little help from music idols Brandy and Eve.

ABC’s “Queens,” which premiered Tuesday, finds the two real-life ‘90s performers playing former members of fictional all-girl hip-hop group Nasty B—es, who get back together years after their heyday.

The other members of the glitzy group, all mature adults now, are played by Naturi Naughton and Nadine Velazquez.

The “The Boy Is Mine” singer added: “Usually there’s been times where one female is celebrated as the rapper, with all of these guys. Even Eve was part of the Ruff Ryders. It was just one girl for each crew. But I’ve never seen four women together doing it, and so I just think that’s a beautiful way to kind of rewrite history with this show by putting us all together.”

Estranged for the better part of two decades, Christian housewife Jill (Naughton), mother of five Brianna (Eve), acoustic singer Naomi (Brandy) and TV host Valeria (Velazquez) are drawn back to the stage by the promise of a revival.

The show switches between the 1990s, when they were huge stars — and often at odds — and the present day, as they try to regain the spotlight despite old wounds and new challenges.

“This show gives us a way to show sisterhood,” Naughton told The News. “You often see women at each other’s throats and fighting and catty. I’m just so refreshed by the ways the writers are giving these women drama, but because they really love each other. At the core of it, they really care about what they’re doing.”

Naughton, one-third of the late-’90s R&B group 3LW alongside Adrienne Bailon and Kiely Williams, joked that she was able to revisit some of her own experiences for the show, which certainly isn’t short on drama.

But in “Queens,” the drama is more heightened than just catty backstabbing.