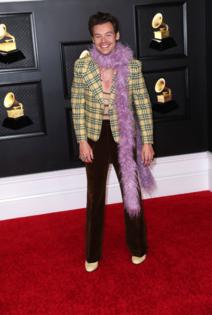 Warning: This story contains major spoilers for Marvel’s “Eternals,” which is out Nov. 5.

After more than a year of industry rumblings and rampant fan theories, a post-credits scene at the world premiere screening of Chloe Zhao’s “Eternals” in Hollywood confirmed Monday that Styles makes his Marvel debut in the film as Eros, brother of Thanos.

Thanos is, of course, Josh Brolin’s omnipotent supervillain who “snaps” half the world’s population into oblivion at the climactic conclusion of 2018’s “Avengers: Infinity War.”

In the Marvel comics, Eros — also known as Starfox — is positioned as an anti-Thanos figure, known for his carefree personality and romantic charm. Eros, who, like Styles, possesses psychic powers capable of manipulating people’s emotions, is also a member of the Eternals, a coalition of cosmic beings tasked with preventing the demise of humanity.

During the major post-credits reveal Monday night, audience members shrieked upon seeing Styles’ face on the big screen at the Dolby Theatre.

Rumors of the “Watermelon Sugar” hit-maker’s foray into the MCU date back to a cryptic September 2020 tweet from freelance film writer Kris Tapley about a “Marvel movie no one knows” Styles is in.

“I have no idea,” Harington said when asked point blank by Fallon whether Styles appears in the movie. “Unless I’ve been recast and he’s playing my part — not a clue.”

“So you didn’t run into him or anything?” the comedian pressed. “You guys did scenes separately?”

LOS ANGELES — Five minutes into "The Power of the Dog," we meet Peter (Kodi Smit-McPhee), a frail-looking young man sitting alone in his room, painstakingly crafting paper flowers that will be placed as table ...Read More

Olivia Rodrigo, the 18-year-old pop sensation whose breakthrough song "drivers license" is one of the biggest hits of 2021, will hit the road next year on her first world concert tour. It opens April 2 at San Francisco's ...Read More

"The dad in the movie looks exactly like my dad. My dad owns that jacket," says "The Mitchells ...Read More

Three movies with international flavor — a French film about Japanese mountaineers, an American studio release set in a mythologized Southeast Asia and an anime from a Japanese master set largely in a virtual world — ...Read More