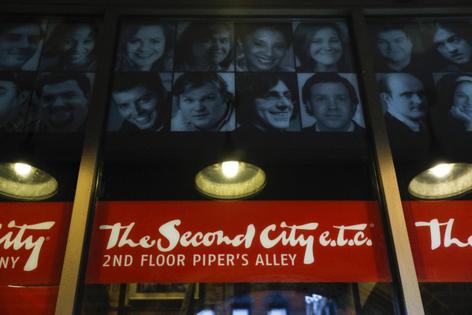 CHICAGO — Early in Second City’s 109th mainstage revue, a father walks with trepidation into his teenager’s room. The dad, played by Adam Schreck, has figured out that this whole work-from-home stuff has changed the dynamic with his kid, richly played by Evan Mills.

It’s a sweet and resonant sketch within this first full-blown revue (with regular running time, intermission and all) since the pandemic. Despite the title of the show, “Together at Last,” there is ample evidence here that’s not really how this particular cast would describe the current situation.

In some ways, the moat of space that union regulations require in this theater between cast and audience, thus forcing most patrons to be cramped together toward the rear of the room, is emblematic of a still-fraught pandemic-era moment.

In fact, much of the material on view worries over division: the fear of parents exposing their child to a grandparent, the battles at school board meetings over critical race theory, a recurring demand for cash reparations by Asia Martin, a young Black performer. In one clever conceit, Jordan Savusa plays a DJ who is working a relative’s wedding for no pay, only to manufacture a sting that sends his relatives off to jail for taking part in the Jan. 6 invasion of the United States Capitol.

Frankly, it’s an honest look at the state of a nation.

Happily, this cast does have a zany side and, at times, they let it loose. Martin is sometimes able to improvise with an infectious freedom, almost mouthing the words before she knows what they will be, which always serves you well at Second City. Better yet, she nows how to dance on that knife edge where the audience never quite knows the object of the satire.

Savusa is eminently likable. Schreck, the most acerbic of this group, always suggests a nicely complex remove between his own personality and what he is actually doing. And Mary Catherine Curran, a formidable rising talent, can really put herself out there.

Curran, alongside Sarah Dell’Amico, takes part in the most closely observed sketch of the night, a very funny encounter between two women in the parking lot of a Piggly Wiggly. Florida and Floridians are the punchline, as you might expect, but Dell’Amico comes from the Sunshine State herself and her work is leavened with a certain compassion.

At times, these progressive performers struggle with the dichotomy of wanting their show to be loyal to their world-view while running up against the imperative of satire taking down the powerful, a group that now includes some of their own in both Chicago and Washington, D.C. Hence, they go after Joe Biden for being a disappointment to the left, which certainly was not the only possible tack.