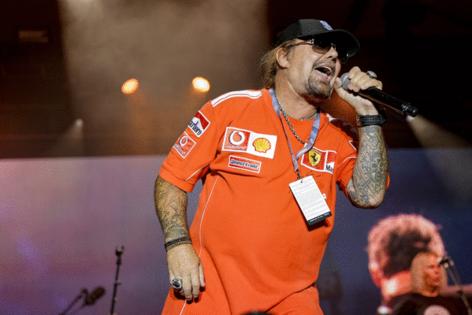 Neil, who was performing solo, fell while playing the 1989 Mötley Crüe hit “Don’t Go Away Mad (Just Go Away)” at the Monsters on the Mountain festival in Pigeon Forge, Tenn.

In a video posted on YouTube, the 60-year-old rocker can be seen with his hands above his head, clapping, while slowly walking toward the edge of the stage before falling.

“The truth is, Vince fell and broke ribs when he fell,” his guitarist later told the crowd from the stage. “Now that sucks for us and him. He was so excited to be here. He lives in Tennessee,” he added.

Neil was willing “to stick it out and tough it up,” but people backstage told him not to do it, he says in another video posted on YouTube.

Later on Friday, Eddie Trunk, a host of the festival, confirmed the news on Twitter.

“Vince slipped and fell off the stage tonight at Monsters on the Mountain here in Pigeon Forge. Vince had been moving & singing great before the accident. He’s at (the) hospital now getting care & X Rays,” he wrote.

Neil was one of the headliners for the three-day classic rock festival. He was performing on the first night.

“She was the...Read More