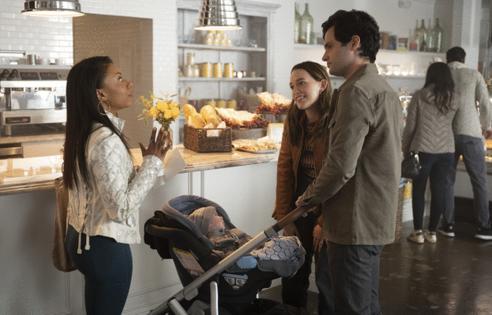 Your favorite television guilty pleasure is back and just as deranged as ever.

It's been almost two years since Netflix's "You" returned for a second season that managed to be even more depraved than its predecessor. From the beginning, the series asked you to take a journey through the mind of Penn Badgley's Joe Goldberg, a serial stalker who will do whatever it takes to find and keep his perfect match.

The show's second season introduced Love Quinn, played by Victoria Pedretti, who proved to be Joe's equal in more ways than he bargained for. It left off with Joe and a pregnant Love moving to the San Francisco suburbs to start a new, quiet life. Even though he seemingly had everything he wanted, Joe couldn't help but be fascinated by the pretty neighbor on the other side of the fence.

With the long-awaited third season of "You" finally dropping on Netflix Friday, viewers get to witness just how twisted a marriage between two psychopaths can really be. While some of their antics stretch believability even for a show that prides itself on a pulpy sense of ridiculousness, fans of "You" will be right at home watching Joe and Love attempt to blend in with a community.

If you were under the impression that a wife and child would change Joe in any way, you were gravely mistaken. Sure, he spends most of the third season's 10 episodes struggling to stay faithful to Love and protect their son, Henry, at all costs. But it probably won't blow anyone's mind to reveal that Joe can't kick his habit of fixating on a new woman.

The big difference between this season and previous outings is the presence of Love. She serves as a fascinating wild card due to her impulsive decision-making and steadily increasing frustration at Joe's clear lack of interest in her. Even more so than Joe, Love could do just about anything to anyone at any given time. It makes for some pretty gripping TV even when it's clear what Love is about to do.

"You" is not the kind of show that asks audiences to empathize with its leads. It's much more interested in exploring the at-home dynamics of two people with such darkness inside of them. At one point, Joe vocalizes the obvious fact that he and his wife's love language is literally violence. If you find that sort of thing repulsive, no one could blame you. But the psychological warfare they engage in is never boring, that's for sure.

Unlike the jump from New York City to Los Angeles from Season 1 to 2, moving the action from one California city to another doesn't make for the most exciting shift in locales, particularly since most of season three takes place in the confines of the aggressively suburban Madre Linda. Just about every stereotype of a place like this is there, from tech bros to mommy bloggers to everyone being on some sort of insane diet.

There's no subtlety in "You," which also features storylines involving domestic violence, drug addiction and even vaccinations. Some are treated with care, while others leave a bit to be desired in terms of their sensitivity levels. Again though, this is the kind of show that regularly features two people trapping their friends and loved ones in an underground cage. Don't come in expecting thoughtful examinations of hot-button issues.

Badgley is still terrifying as Joe, who continues to con those around him with his harmless nice-guy routine. Very few actors use their entire body to full effect like he does. Between his bordering-on-gaunt frame, constantly messy hair and bulging eyes, Badgely never lets you forget what a complete weirdo Joe is. You're never exactly rooting for him, but you also can't look away from the carnage he leaves behind.

Pedretti somehow manages to be even more off-kilter than Badgely after a season of playing Love like another unassuming Joe Goldberg victim. She is anything but a damsel in distress and anyone who stands in the way of her man or son is going to feel her wrath. Pedretti also imbues Love with a healthy dose of grief over the death of her brother, Forty (James Scully), and exasperation over her fraying relationship with her mother, Dottie (Saffron Burrows).

As trashy TV goes, "You" still reigns supreme as one of the more bingeable pieces of entertainment out there right now. Even if you find yourself scratching your head as to how the residents of Madre Linda continue to buy the wild stories Joe and Love concoct to hide their indiscretions, the show makes it easy to shrug that off and just enjoy the ride.

Now that Netflix has officially renewed "You" for another season, we'll have to wait and see if "You" can pull off that trick for a fourth time.