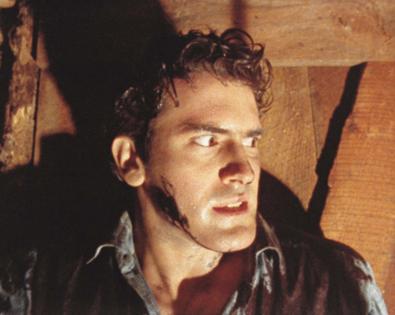 “The Evil Dead” has been scaring horror fans for four decades, but star Bruce Campbell still remembers when it had a frightful time finding an American distributor.

Starring Campbell, as Ashley “Ash” J. Williams, the 1981 horror, written and directed by the actor’s childhood pal Sam Raimi, follows a group of friends who inadvertently release a horde of demons in an isolated cabin in the woods.

“We screened it for multiple distributors and they have thumbed their nose at it. We sold it to Palace Pictures in the U.K. And they didn’t treat it like a low-budget movie,” Campbell, who has reprised his role in multiple sequels and the “Ash vs Evil Dead” series, recalled to the Daily News.

“And that thing really took off. We were second only to ‘E.T.’ in a lot of the markets there,” he said. “All of a sudden New Line Cinema was like ‘Hey, what’s this movie?”

Of course, Campbell, now 63, is more than willing to admit that no one involved knew what they were doing at the start, and that if Raimi hadn’t been a partner, he would have gotten the boot.

Raimi has gone on to a string of smashes including “Darkman” and the 2002-07 “Spider-Man trilogy, but at the time he was an unknown.

But one name all horror fans knew was Stephen King.

The author attended the film’s screening at the Cannes Film Festival and wrote a glowing review in Twilight Zone the Magazine headlined “THE EVIL DEAD: Why you haven’t seen it yet and why you ought to.”

The series has gone on to have legs and so has Ash, who Campbell cites as “one of the few good guys in a horror series.”

“You have Freddy and Jason and you know tons of guys with hockey masks and machetes, they’re the bad guys,” Campell said. “But with Ash, he’s an idiot. But he’s your idiot. And he’s the one who is going to get through this.”

And so more than four decades later, a cult film is in more theaters today than when it first came out, which Campbell called “incredibly gratifying.”