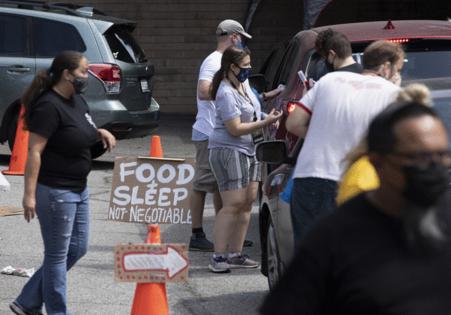 Work on TV and film sets might come to a standstill as soon as Monday if 60,000 crew members working nationwide go on strike. In Chicago, that could affect a number of projects including the Dick Wolf shows for NBC, a forthcoming reboot of sci-fi drama “The 4400,” a series for AMC called “61st Street,” Fox’s “The Big Leap” and a show for Apple TV+ starring Elisabeth Moss.

At issue are better pay and quality of life issues for the crew.

The labor union for the majority crew members is called IATSE (International Alliance of Theatrical Stage Employees) and it is currently negotiating a new contract with Hollywood studios (represented by the Alliance of Motion Picture and Television Producers) and there are a few things at stake.

In Hollywood, the big money goes to people who are designated “above the line”: Actors, writers, directors and producers. Crew jobs provide a solidly middle class income (from electricians to camera operators to people in the wardrobe department) and they are considered “below the line.” Under the old contract, projects made for streaming platforms were classified as “New Media” and had a different compensation structure for below-the-line workers. This is because streamers were once the underdog trying to break into Hollywood. Now they are Hollywood, but in some cases are still paying discount wages.

Other concerns include long work hours, skipped meal breaks and short turnarounds from one day to the next. TV and film is budgeted by days and adding days to a shoot is more complicated than simply adding overtime (14 hours or more are commonplace) or paying meal penalties when the crew works through their lunch break.

Imagine regularly working 14-hour days and not getting enough sleep because of tight turnarounds. Then imagine what effect that fatigue has on a person when they get behind the wheel of a car to drive home. The results can be deadly.

High-profile actors have voiced their support for IATSE, as have other guild members. Writer David Slack’s credits include the reboots of “MacGyver” and “Magnum P.I.” and he recently tweeted: “Studios that rake in billions even during a global pandemic can easily afford to give IATSE members good wages, secure health and pension plans, sane hours, safe working conditions and a fair deal.”

As of this writing, negotiations are still ongoing. IATSE says it is hoping for a deal but preparing for a strike.

What’s so odd is these concerns aren’t new. The dangers of excessive work hours were spelled out in “Who Needs Sleep?,” the 2006 documentary from Chicago-born filmmaker and Oscar-winning cinematographer Haskell Wexler. It’s available for free on Vimeo and every point made in the film is still a concern today.

“Hey, this is Hollywood, you’re all making good money, so what’s the big deal about missing some sleep?” Wexler says in the film, anticipating your skepticism. But the hazards are real. In 1997, Brent Hershman was a cameraman working on the movie “Pleasantville.” He died in a car accident after working a 19-hour day, after working a series of 15-hour days previous. “I remember being very angry that he lost his life simply for working hard,” his widow tells Wexler.