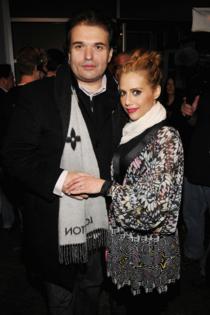 Riding the Paris Métro home from her office in 2007, Elizabeth Ragsdale began flipping through an issue of Us Weekly given to her by the receptionist at the law firm where she worked as a paralegal. But just as she was about to sink into the magazine's tales of Lindsay Lohan and Brangelina, Ragsdale noticed a cover line that alarmed her:

There, next to the "Clueless" and "8 Mile" actor, was Simon Monjack, the man Ragsdale had once loved. The guy who proposed to her with a diamond ring from Tiffany's just two weeks after they met. The father of her son.

"The first feeling I had wasn't jealousy. It wasn't: 'How could he do this?'" she recalled. "It was: 'That poor woman.'"

But by then, Ragsdale had not been romantically involved with Monjack for nearly a decade. And he'd never met Elijah, the boy she claimed was his son. "I thought the letter probably would have seemed like me saying: 'He's got a kid. He needs to pay child support and you've got a lot of money, so you pay it for him.'"

She never sent the note. For the next 14 years, she kept the story private — until this year, when filmmakers approached her about participating in "What Happened, Brittany Murphy?" The two-part docuseries, new this week on HBO Max, investigates Murphy's unexpected death in 2009, at age 32 — an event that has been shrouded in mystery and spawned endless conspiracy theories.

Monjack, who himself died in 2010 at age 40, just six months after Murphy, has long been at the center of that mystery. Murphy's cause of death, according to an autopsy, was pneumonia, anemia and multiple drug intoxication; his was acute pneumonia and severe anemia. Both were found dead at the Hollywood Hills home they shared.

An investigation by the Los Angeles County Department of Public Health ruled out toxic mold in their house. Forensic experts explained that traces of heavy metals found in Murphy's hair, which her father Angelo Bertolotti claimed as evidence of poisoning, were consistent with someone who regularly dyed their hair. And through it all fans and tabloids alike questioned the nature of Murphy's relationship with Monjack. She had previously dated wealthy performers like Eminem and Ashton Kutcher. He was an independent film producer with scant credits to his name and a history of legal and financial problems, forced to pay more than $500,000 in a pair of lawsuits in 2006 and 2007 and with four evictions on his record.

In the HBO Max series, Murphy's co-stars and filmmakers allege that Monjack was interested in Murphy for her money and also controlled various elements of her life: He allegedly urged her to lose weight, forbade her from doing intimate scenes with other men and cut out her agents and managers.

Brian May is striking back against a British publication that he says “subtly twisted” his words to make it sound as if he were hostile toward transgender people.

The Queen guitarist was quoted last week in the Mirror...Read More

“The Power of the Dog” may be set a century ago, but star Kodi Smit-McPhee believes his haunting Western drama examines horrors that still persist today.

The Montana-set movie explores the intense dynamic between a ...Read More

In 2021, coming-out stories are pretty standard and widely accepted — unless you are Colton Underwood, “the virgin Bachelor,” a man who lived out heterosexual dating fantasies three times over the course of two years...Read More

Channing Tatum is prepared to take it all off again.

The 41-year-old actor will reprise his role as stripper Mike Lane for the third “Magic Mike” movie, he announced Monday.