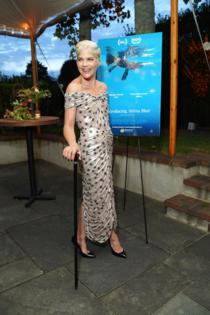 CHICAGO — In summer 2019, a well-known Hollywood actor could be spotted on downtown sidewalks, her head shaved, her walk aided by a stylish three-wheeled, lemon-yellow scooter.

Selma Blair had come to Chicago for a little-known but often highly effective multiple sclerosis treatment, pioneered in the United States by Northwestern University’s Dr. Richard Burt. Blair’s malfunctioning immune system would be suppressed with chemotherapy, then allowed to reboot with the aid of a hematopoietic stem cell transplant, in the hope of restoring it to health.

The stakes were high, both for Blair, who was very ill, and for the treatment itself, which, despite some excellent published results, remains rare in the U.S.

Now, in the new documentary, “Introducing, Selma Blair,” Blair is offering the fullest picture yet of her treatment and recovery, in what supporters of HSCT for MS, including patients who have undergone the procedure, hope will be a turning point in public awareness.

“It absolutely is a huge moment,” said Julie Eberhardt, a Chicagoan who had the transplant for MS in 2018, and is active in the HSCT communities on Facebook and Instagram.

“Despite the fact that there are so many normal people willing to tell our stories, not a lot of people tend to pay attention,” said Eberhardt. “But if a celebrity’s talking about it, they’ll listen. And honestly, HSCT is a really interesting story; you just have to get their butts in the seats for five minutes and make them listen.”

The documentary shows Blair’s symptoms before HSCT: her legs stiff and unsteady, the effortlessly funny “Legally Blonde” actor hunched over, her back bending at a precarious angle, as she slowly and carefully navigates a staircase in her home with the aid of a cane.

She’ll be speaking clearly, and then it’s almost like a curtain comes down, and the words start coming out in slow motion, each syllable a monumental effort.

A single mom, Blair, now 49, rallies to play a hilarious game of dodgeball with her now 10-year-old son, Arthur Saint Bleick. But then, every bit of carefully conserved energy spent, she lets herself collapse on the floor.