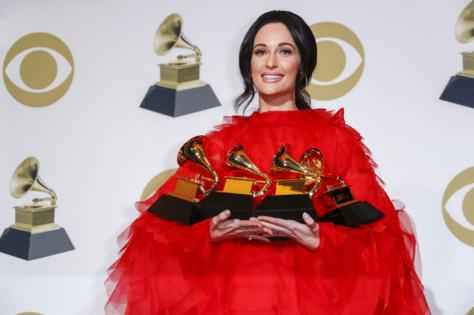 The Recording Academy found itself in recognizably hot water this week when word got out that the industry group had barred Kacey Musgraves’ “Star-Crossed” from consideration in the country album category at the 64th Grammy Awards set for Jan. 31.

In a widely shared letter from Cindy Mabe, president of Musgraves’ record company Universal Music Group Nashville, to academy chief Harvey Mason Jr., Mabe argues that “Star-Crossed‘s” exclusion — ostensibly on account of its not being country enough — is unfair because the decision was made in part by people who stand to benefit from it.

The people she means? Country artists (and members of their teams) more likely to be nominated for country album without the acclaimed Musgraves as a pesky competitor.

Mabe’s complaint about a conflict of interest evokes the Weeknd’s calling the academy “corrupt” after he failed to pick up a single nod at the latest Grammys ceremony — public criticism that helped push the academy this past spring to eliminate the secretive nominations review committees that for years oversaw, and sometimes amended, voters’ choices for big prizes like album, record and song of the year.

The committee under fire now is the country screening committee, one of several small groups of unspecified experts the academy still convenes to determine whether certain albums or songs qualify for certain specialized genre awards. The idea of those groups is to ensure that the recordings vying in the traditional R&B performance category, for instance, truly represent that style.

Clearly, though, the same problems of politics apply. A Grammy nod can lead to a Grammy award or a performance on the telecast, both of which can lead to a lucrative boost in sales and streams; Musgraves, a proven Grammy fave, was sure to be seen by some in the room as an obstacle to that payday.

Beyond whatever machinations were involved, the academy’s call regarding the pop-leaning “Star-Crossed” raises larger, more complicated questions about how genres are policed — and by whom — at a moment when many of the old lines have blurred. (An academy spokesperson didn’t respond to an email asking whether the committee’s decision was final. First-round Grammy voting is due to begin Oct. 22.)

In her letter, Mabe points out that Musgraves made “Star-Crossed” with the same creative crew that made 2018’s “Golden Hour,” which won Grammys for country album, country song and country solo performance in addition to the overall album of the year award. “Sonically, it’s got more country instrumentation than ‘Golden Hour,’” she adds of the more recent LP — a subjective characterization, for sure, but a suitable one for the academy’s intrinsically subjective process.

According to the group’s rulebook, the Grammys’ country categories are open to “recordings that utilize a stylistic intention, song structure, lyrical content and/or musical presentation to create a sensibility that reflects the broad spectrum of country music style and culture.”

PHILADELPHIA — Four Seasons Total Landscaping is putting on its first indoor concert. And announced it Wednesday with a fake news conference.

NEW YORK — For her next big gig, Cecily Strong will be working almost every day of the week.

The “Saturday Night Live” breakout is set to make her New York stage debut in an off-Broadway production of “The Search ...Read More

The second time around may also be the charm for Anthony Hopkins.

Fresh off the success of his Academy Award win for his turn in Florian Zeller’s “The Father,” the 83-year-old actor will star in the playwright/...Read More

Until now, that is: the actress takes center stage in "Introducing, Selma Blair," a genuinely touching and unflinching look at her ongoing bout with multiple ...Read More