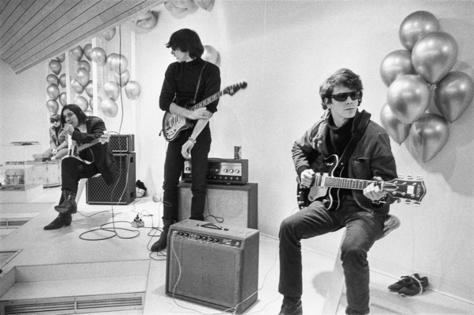 Director Todd Haynes directly connects the drone-rock band — of which it's been said that every one of its fans became a big-time musician (including members of R.E.M. and Nirvana) — to the beat poets, experimental filmmaking and music that influenced it. Haynes is a bit too focused on the early years of the band, when singer Nico briefly drifted into its orbit, and he pays too little attention to drummer Maureen Tucker. But he wisely steers the doc away from PBS "American Masters" territory to something much stranger and more exciting. Apple TV+

Ava DuVernay, best known for "Selma" and "When They See Us," tries her hand at reality TV with this feel-good series, which premieres Friday, about families that temporarily switch households. Every episode ends with a dinner party that seems inspired by the first Thanksgiving. It's not the most original idea, but the acclaimed director is genuinely committed to providing life lessons and avoiding "Real Housewives" theatrics. 8 p.m. ET Friday, NBC

That subtitle might more accurately be "It's His World and, If We Want, We Can Watch Him Live in It From a Nearby Rooftop." That's essentially what happens in this record of the concert he gave last New Year's Eve. The songs, which lean heavily on his newer, James Blake-ish material, are fine but it appears to have been difficult to get much energy going with no audience (the show was performed on the roof of a Beverly Hills hotel, so any onlookers are removed from the "stage"). And the documentary scenes that interrupt the concert to fill in how the show came together are just that: interruptions. Amazon

The talented point guard previously prided himself on not giving two hoots about his public image. But now that Russell Westbrook is a Los Angles Laker, his PR team has gone into overdrive. This back-slapping documentary, co-directed by filmmakers Gotham Chopra and Erik LeDrew, might as well be a Tinder profile — or an application for sainthood. The only detractors on hand are ESPN commentators who are shot to look like they're broadcasting from a studio in purgatory. 9 p.m. Friday, Showtime

Very little footage exists of the midcentury Chicago club that's legendary among a specific group of aficionados (they probably wore trilbys, drank Old Fashioneds and listened to a lot of bebop). Barbra Streisand, Mort Sahl and Lily Tomlin made early-career appearances at the nightclub, which is recalled in a nostalgic mix of vintage photos, audiobook excerpts and lively interviews. On-demand services

Rated R for strong bloody violence throughout, grisly images, language and some drug use.

What it’s about: Picks up where "Halloween" 2018 left off, as Michael Myers continues his 40 year anniversary ...Read More