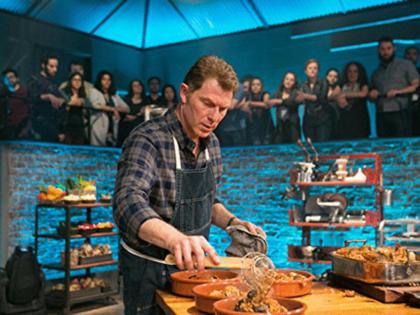 After it was reported that Bobby Flay and Food Network would be parting ways after the two sides couldn’t come to an agreement on a new contract, a source close to the negotiations revealed that the celebrity chef wanted $100 million in a new deal with the channel.

If Flay’s demands were met by Food Network executives, not only would his 27-year run with the network continue on, but he would have made $20 million more than his counterpart, Guy Fieri.

“Guy has a three-year deal,” the source said to People magazine. “The terms of what Bobby was looking for were gravely different than just cash. The terms were longer, the scope of work was different and thus the dollars were different. It’s not just $80 million to $100 million.”

Flay, 56, will be departing the network at the end of the year, but under better circumstances than initially reported.

“The two sides were just way too far apart. It became clear the two could not and would not be able to come to terms and so the network decided to move forward without him,” the source said. “Regardless, it was really much more amicable than you’d think. It was strictly business.”

Flay joined Food Network in 1994 and has been a staple of the channel, hosting a variety of hit programs including “Boy Meets Grill,” “Beat Bobby Flay,” “Food Network Star, Throwdown! with Bobby Flay” and “Iron Chef America.”