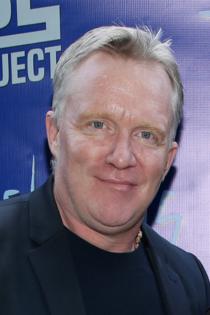 In the original 1978 horror movie “Halloween,” Jamie Lee Curtis plays a teenage babysitter to a little boy named Tommy Doyle. In the latest incarnation of the franchise, “Halloween Kills,” Tommy Doyle is all grown up and facing down Michael Myers once again, and he’s played by Anthony Michael Hall.

“It’s really fun being part of a franchise people are anticipating,” said Hall. “The movie starts out with the survivors having a group session in the bar, so it’s directly threaded from ‘78 to the present.”

Hall, who goes by Mike, has been acting since he was a child. He was a staple in films either writer and/or directed by John Hughes in the 1980s, including “National Lampoon’s Vacation,” “Sixteen Candles,” “The Breakfast Club” and “Weird Science.”

Despite the prevalence of reboots at the moment, Hughes’ most famous titles have yet to be reimagined. “I’m kind of glad, to be honest,” said Hall. “Out of respect for Mr. Hughes (who died in 2009). If he was rebooting them himself and giving them his blessing, that would be one thing. But I think his work is so special, I think it should be left alone. Time will tell, I guess.”

When asked about a worst moment in his career, Hall recalled a memory from a time before everything took off for him professionally.

“There are some raunchier versions I could have responded with here, but also stories about people I’ve worked with, but I don’t really like to disparage people. So I thought of a story, and it’s actually kind of sweet.

“I auditioned for ‘On Golden Pond’ (from 1981 starring Katharine Hepburn and Henry Fonda) and I went through a series of auditions on the project. And I think what made it unique was working with the director Mark Rydell in the audition phase, he was just really cool about it. There were multiple callbacks and I was just a little kid, like 8 or 9 years old at the time.

“And on the final callback, after my audition, I was sitting there with the other kid actors in the waiting room and Mark Rydell came out and kind of broke the news to me (that the role was going to someone else), but the way he did it was really special. He did it with the love of a father or a grandfather. He was very forthright and honest. It’s like those parents who speak to their kids as adults from a young age. I think he said something to the effect of, ‘Unfortunately we’re going to go in a different direction, but I just wanted you to know that you did such a great job.’ Very gentle and caring.

“It was incredible. I was upset in that moment. I mean, I did want it. Even as a peanut of a kid, I knew how big of an opportunity it was to work with the Fondas (Jane Fonda also has a small role in the film). But at the same time I was very impressed with how he took care of it, in a very nice and caring way. And I wasn’t even really working as a child actor at the time. (Hall had one or two minor screen credits when he auditioned for the film.)