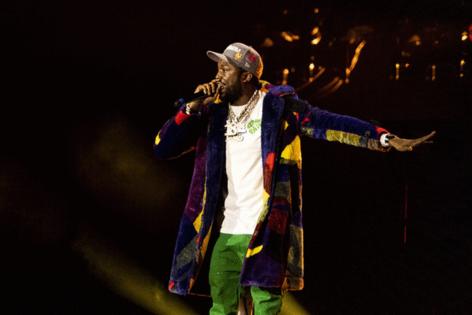 PHILADELPHIA — It’s been more than three years since the Free Meek Mill movement came to fruition and the Philadelphia rapper was released from the state prison in Chester where he had been serving a two- to four-year sentence for a probation violation stemming from a 2007 gun charge.

But never fear: The freedom that Mill fully attained in 2019 when his cause celebre case was finally put to rest after he pleaded guilty to a firearms possession offense and all other charges were dropped has not blunted the intensity of his music or the capacity for soul searching that has forged a deep bond with his audience.

Mill’s new album, "Expensive Pain" (Maybach Music Group / Atlantic ***), is his fifth. It’s the first by the 34-year-old rapper and criminal justice activist since "Championships," the 2018 release that came out six months after the whirlwind day when he caught a helicopter ride from Chester to the Wells Fargo Center in South Philly in time to ring the bell at a Philadelphia 76ers playoff game.

“I don’t really remember that day,” Mill said, speaking on the phone last week from New York. “Everything was moving so fast, it was like a big blur to me. I don’t even remember being at the Sixers game or how it felt emotionally. I have to watch it on YouTube to remember the feeling.”

"Expensive Pain," whose cover features a painting by artist Nina Chanel Abney, is in many ways a celebration of freedom. It boasts a bountiful list of features that cements Mill’s status as a mature artist poised at a point in his career between elder mentors like Jay-Z and Rick Ross and a younger rappers like Lil Uzi Vert, Moneybagg Yo, Lil Baby and Lil Durk as well as singers Kehlani and Brent Faiyez.

But ask the kinetic rapper which songs on the album mean the most to him, and he responds with a list that includes “On My Soul,” “Halo,” “Cold Hearted III" and the title track — all of which tend toward introspection and concern the mental health consequences of life in Philadelphia neighborhoods plagued by gun violence.

“It’s all PTSD,” said Mill, who in August received the Nelson Mandela Changemaker Award from global business group PTTOW! (Plan To Take On The World) for his work with Reform Alliance, the parole and probation organization he co-founded in 2019 with Sixers co-owner Michael Rubin. He is also a co-owner, with Rubin, of Indianapolis-based Lids, the largest hat retailer in North America.

“When we were younger, we were getting beat up by cops, and growing up in poverty, we didn’t have fathers in the house,” said Mill. “Probably the doctors in Philadelphia have PTSD, and the detectives and the people who live in the communities and probably some of the news reporters have PTSD, from living around all that murder that’s happening in the city.”

Mill grew up in South and North Philadelphia. His father was killed during a robbery in South Philly when he was 5. “I happened to live in those areas for 20 years of my life,” he said. “You can’t just remove it. Some of my friends and family was killed. My father was killed.”

Mill has used his fame to call attention to the cases of incarcerated people such as Eric Riddick, the Philadelphia man he met at the Chester State Correctional Institution who had served 29 years of a life sentence for murder. He was freed in May after the Philadelphia District Attorney’s office found he didn’t get a fair trial.