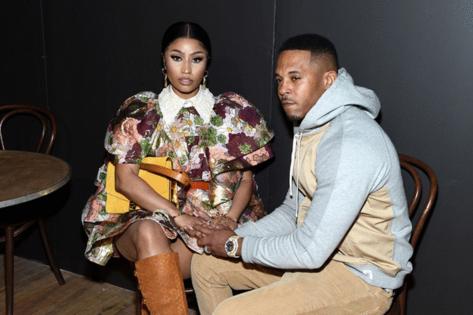 The woman suing Nicki Minaj and the rapper’s husband, Kenneth Petty, spoke out against the couple on talk show “The Real” this week, accusing the pair of launching an intimidation campaign against her and threatening her safety.

Petty was convicted in 1995 of sexually assaulting Jennifer Hough, who appeared Wednesday in her first televised interview about the case and tearfully detailed the 1994 assault and the recent defamation and witness intimidation lawsuit she filed against the couple. She said she’s been living “in fear for the last year” after allegedly being threatened by their associates.

The $15 million lawsuit was filed in August in U.S. District Court for the Eastern District of New York. It alleges that for months in 2020, Minaj (real name Onika Tanya Maraj), Petty and their associates pressured Hough to recant her 1994 allegations against Petty.

Hough told hosts of “The Real” that she was offered up to $20,000 to take back her allegations, claimed that she spoke directly to Minaj in March 2020 and ultimately refused her and her associates’ offers to backpedal on her story.

In an interview with the Los Angeles Times, Hough’s attorney, Tyrone A. Blackburn, claimed that the offers deteriorated into threats against Hough’s safety.

“What they did to me and my family wasn’t OK,” Hough said on the syndicated talk show while seated next to Blackburn. “It wasn’t right and it doesn’t matter how much money you have. It doesn’t matter what your status is. You can’t intimidate people to make things go better for you. And that’s what they did.”

Hough also detailed the defamation allegations in a March interview with the Daily Beast, which was among the first publications to give Petty’s victim a platform.

Petty’s lawyer, Michael A. Goldstein, declined to comment Thursday, and a representative for Minaj did not respond to a request for comment. Their legal teams have not yet filed a response to the lawsuit.

The “Bang Bang” rapper first dated Petty when she was 16 and living in Queens, New York. The couple wed in 2019 after reportedly being back together for about a year. They welcomed their first child, a son, in 2020. When Hough learned that Minaj, 38, and Petty, 43, started dating, she said she “was so afraid of being found out.”