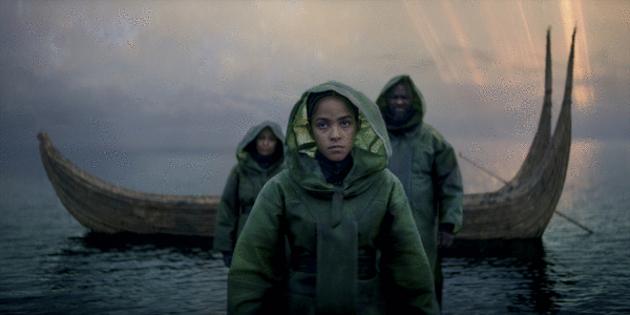 One of the appeals of science fiction is the way it can shift reality a few notches, this way or that, and then show us how things might play out. What if some of the basic details of life were different — how would it all go? Sci-fi for the screen often isn’t interested in these kinds of questions, though. When you peel back all the high-concept window dressing, so many of these projects are just stories of war and domination transplanted to a futuristic setting. Not all. But a lot. I find that to be so uninspired, and I’m probably in a minority because there are plenty of audiences for this sort of thing. With its new series “Foundation,” Apple TV+ is banking you’re one of them.

Based on the “Foundation” books by the prolific sci-fi writer Isaac Asimov, Apple is making a big “welcome to dystopia!” swing. Like every other streaming service, the company is looking to keep viewers subscribed over the long haul by adapting intellectual property that it can hopefully — studio executive fingers crossed! — exploit for all its worth. There’s money in them thar IP hills, if not always satisfying storytelling. But that’s never stopped a franchise in the making, and showrunner David S. Goyer was recently dubbed the “IP whisperer” by The Hollywood Reporter, so what could go wrong?

Well, there’s Asimov’s reputation. Even decades before his death in 1992, he was infamous for his “feckless lechery,” as he euphemistically put it, and was dubbed “the man with a hundred hands,” which sounds like a science fiction nightmare all its own. But Asimov’s books have a significant following. Maybe you’re inclined not to dwell on the man but the accomplishment herein: At long last, an adaptation of this sprawling book series. Or maybe you’d prefer to see these kinds of big-budget opportunities go to science fiction writers, be they dead or alive, who aren’t notorious gropers. I’m in the latter camp and more of an Octavia Butler fan myself; the good news is that a number of adaptations of her work are in the pipeline.

With its epic thousand-year span, the challenge presented by “Foundation” is a massive one and I wouldn’t say Goyer successfully got his arms around it, but he’s made smart choices by casting women in roles occupied by men in Asimov’s original. In fact, two Black women are at the forefront of this story, about a galactic empire on the brink of chaos and collapse, as foretold by an inscrutable mathematician named Hari Seldon (“Chernobyl’s” Jared Harris), who uses historical data to predict the future.

Even your most basic fund manager will tell you that past performance is no indicator of future results. But Hari’s all “Nope, the doomsday math checks out” and this greatly displeases a trio of cloned brothers (a new detail added by Goyer) who rule over the empire with their genetically identical iron fists. They spare Hari’s life but banish him to a planet at the outer edges of the galaxy, along with a young prodigy named Gaal Dornick (Key Figure No. 1, played by Lou Llobell with just the right mix of nervous curiosity and backbone) and a host of other followers. They call themselves the Foundation and once they land, they plan to spend their lives creating a repository of knowledge to pass on to future generations once everything goes to hell, the way Hari’s mathematical models always predicted. OK, that’s one thread.

The other takes place 35 years later: The Foundation is preserving various technologies and information while the Warden, aka Salvor Hardin, patrols their desolate outpost. (She is Key Figure No. 2, played by a terrific Leah Harvey with a quiet but wary skepticism.) Suddenly their placid lives are disrupted because, well, it was foretold. I’m unclear where the show actually stands on questions of free will; Hari’s theories can anticipate the group behavior of large populations but is fuzzier when it comes to individuals, which feels just loosey-goosey enough to prevent a fiction writer from painting himself into a corner. I think it mostly boils down to this: Certain (bad) things are destined to happen, but a handful of special people (Gaal and the Warden, but also Hari) can buck the trend through a combination of math, woo-woo, smarts and gritted determination.

I joke about Hari’s prophecies, but watching the show, the obvious real-world analogy is every climate scientist who’s been doing their level best to warn against an increasingly dire future on planet Earth, only to be ignored or silenced by powers that be. That metaphor only goes so far because like most hero stories, “Foundation” isn’t about the power of collective action so much as the unique talents or importance of Chosen One-type characters.

Something about this very expensive project got away from its creators — I’m not even sure it works as a solid adventure story — but there’s a lot to like here. It’s a strong cast throughout (including Clarke Peters of “The Wire” and Alfred Enoch of “How to Get Away with Murder”) and unlike so much science fiction, Black people and other people of color fully exist in this galaxy. It’s thrilling to see to Black women anchor the narrative (even if Gaal disappears for long stretches) but they also bear the disproportionate burden of saving everyone. It’s complicated (especially when you think about how this plays out in real-world activist circles) and I wish the show had found a way to consider what that means. Then again, racism doesn’t exist in the narrative, even if tensions between other planetary ethnicities do.

Despite a deep bench of acting talent (including Lee Pace, who heads up the trio of clone brother emperors) the writing itself lets them down time and again. Not one line of dialogue grabbed my ear as clever or memorable. Very few distinct personalities pop out. Characters are introduced only to be killed an episode or three later, but they’re rarely developed enough for it to matter. Visually the show is indistinct, although there’s a lot of really great outerwear courtesy of the costume design team known simply as Kurt & Bart; I’m a big fan of the Warden’s motocross-inspired gear.

You’re left to admire the things that work in this 10-episode season and squint at so much that doesn’t. The time jumps are confusing and the story needs a clearer arc. It doesn’t feel immersive enough and, absent the texture of everyday life, the stakes feel too theoretical. The editing is clunky and the show lacks a sense of humor; does no one in this galaxy appreciate the absurdity of … anything? On the plus side, there’s an endless amount of chemistry between Harvey’s Warden and her swaggering beau (an interplanetary truck driver of sorts played by Daniel MacPherson), but it’s less in the writing than the sparks the actors generate on screen.

Goyer has said he envisions the show running eight seasons, if all goes to plan. Time will tell if there are enough fans of the book series willing to take that bumpy journey.

Where to watch: Premiered Friday on Apple TV+