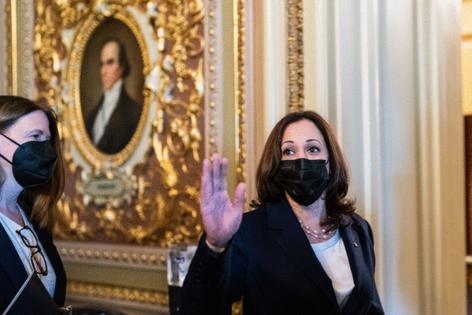 NEW YORK — Friday’s episode of “The View” was thrown into upheaval just before Vice President Kamala Harris was set to appear.

Co-host Sunny Hostin and guest co-host Ana Navarro were asked to leave the set of the daytime talk show during the broadcast just before Harris was about to be interviewed.

“Shall I introduce the vice president?” co-host Joy Behar then asked before producers told her to hold off. “Shall we dance? Let’s do a tap dance.”

The comedian, 78, later apprised viewers of the situation.

“Since this is gonna be a major news story any minute now, what happened is that Sunny and Ana both apparently tested positive for COVID,” said Behar. “No matter how hard we try, these things happen. They probably have a breakthrough case and they’ll be OK, I’m sure because they’re both vaccinated. Vaccinated up the wazoo, you know, a lot of vaccines.”

Behar and co-host Sara Haines took questions from the audience to fill the awkward airtime while waiting to interview Harris.

After the remaining hosts took questions from the audience, Harris was eventually interviewed from backstage shortly before noon, making for a shortened interview since the show was about to end.

“Vaccines really make all the difference, because otherwise we would be concerned about hospitalization,” said Harris. “The vaccine is free. It is safe and it will save your life. So, folks just need to get vaccinated.”

ABC did not immediately respond to the Daily News’ request for comment about how Hostin and Navarro’s positive tests will impact in-person filming in coming days.