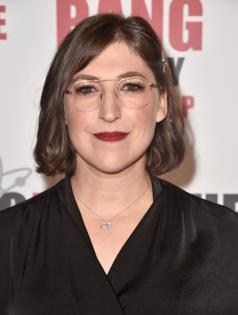 Mayam Bialik is shedding some light on her “dreamy” new job.

The actress, director and neuroscientist was recently announced as a host of “Jeopardy!” following the ouster of the popular game show’s former host and executive producer Mike Richards.

And she was more than ready to step up to the plate.

The television vet recalled, in an essay, that it was her 15-year-old son who made it known that the internet was buzzing that she would be perfect to guest-host the show.

“I had to learn all the rules and the language of the show,” Bialik wrote in Newsweek about serving as a guest host earlier this year. “I rarely have the experience of feeling I belong somewhere after such a short period of time, yet I had a spooky — but positive — feeling when I was there. I remember saying: ‘I don’t want to leave.’ At that point, I knew nothing about what was going to happen.”

“I was also sure that someone newsy, like Savannah Guthrie, was going to be made the permanent host, so a lot of the buzz about me...went in one ear and out the other,” she added, referring to the “Today” show anchor who was one of many celebrity fill-ins following the death of longtime host Alex Trebek.

“It is also a show that has such a legacy, and with the grief from Alex’s death so fresh, I had no idea what the executive producers were going to want to do. I had to be patient,” the 45-year-old mother of two continued.

“I joke that I would give up my first child to host permanently! I think my son and I have a close enough bond that he will come back to me!”

Eventually, Richards was named the new host and Bialik was tapped to host special episodes of the game show. But those plans fell apart when Richards was fired amid the resurfacing of controversial comments he made during a podcast years before.

“Of course I was in touch with Mike as he was my boss at that time, and I don’t wish ill on him, or anyone,” the “Big Bang Theory” star shared. “But the complexity of these situations is not something that can be summed up easily. My first response, when all of this went down, was to say to the Jeopardy! team: ‘How can I help?’ Because I am part of this family.”

Bialik said she feels “very honored” by the opportunity, noting, “It’s been as dreamy as it was for the two days that I guest hosted.”

“There will never be another Alex...It’s important not to try and be him, because you can’t...”