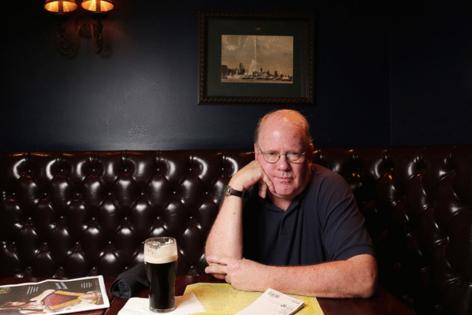 CHICAGO — When Mike Houlihan, that local whirlwind of creative energy as writer, actor and radio host, started the first Irish American film festival years ago, he did so in part to find a home for his own movie, a charming and humorous documentary that followed Houlihan and some members of his family as they traveled to Ireland to explore the differences between the Irish and Irish Americans. Titled “Our Irish Cousins,” it earned praise from the late film critic Roger Ebert, who wrote that it was “made with such genial spirits and good humor.”

The seventh edition of what Houlihan calls the Irish American Movie Hooley (“hooley” being Irish slang for a raucous party) comes to the Gene Siskel Film Center this weekend with three fine and very different films.

The first of these, Friday at 8 p.m., is “In Search of Weeping Jim,” another Houlihan production. He is its writer and director, and his son Paddy provides polished narration in a film focused on a relatively unknown but important Chicago character named James Ambrose Kearns.

Never heard of him? Understandable perhaps, but you will come to know his whole story, a lively tale that Houlihan says, “Represents the story of the Irish immigrant in America.”

Kearns was born in 1871, the son of James and Catherine Quinn Kearns on the tiny inner island of Inishcuttle Kilmeena, County Mayo, Ireland. He came here in 1884 at the tender age of 13, attended St. Ignatius high school and became a lawyer, a three-term Alderman, clerk of the municipal court and city treasurer. And he was that rarest of local political characters — a Republican — and earned his “Weeping Jim” moniker from those who observed him at wakes, offering his condolences and compassion for the bereaved families, most of whom were his constituents.

He also was the father of the Chicago flag, and you will learn of the particulars of that too, as the film introduces us to Kearns relatives here and, charmingly, in Ireland. Houlihan gives himself a part in the film, playing the ghost of Kearns, with the bushiest eyebrows you’ve ever seen. (And after the credits roll, you’ll get to know in the film a lovely woman named Ann Quattrocki, who is planning to attend the screening).

Saturday at 8 p.m. you’ll can see a “A Bend in the River,” It is the work of writer/director Colin Broderick, whose “Emerald City” was a highlight of 2017′s Movie Hooley. Semi-autobiographical, this is the story of a writer who returns to his native Ireland after his mother’s death, having spent 25 years in New York.

Played with quiet intensity by former professional boxer John Duddy, Matt Donnelly is confronted by the ghosts of his past and there are plenty of them, some dead but many alive and a few not just resentful but even menacing. We meet an old lover, his brother who is a priest, old friends who are now anything but friendly. It’s a brooding journey as Donnelly tries to make sense of the Northern Ireland of his youth and what he discovers there as an adult.

The 5 p.m. Sunday cinematic offering is the heart wrenching but ultimately hopeful documentary, “Endless Sunshine on a Cloudy Day.” The film is about Jade McCann, a popular young Instagrammer, and her father Anthony. In March 2018, Jade was diagnosed with a rare form of cancer, savage news that came three weeks after a cancer diagnosis for her father. Jade decided, bravely and in collaboration with director John Connors, to make a film detailing the journey of both herself and her dad.

It may not sound like a joy and it is not. But it does prompt a lot of questions worthy of exploring. Both people are honest and compelling, and the film explores the often toxic and uncivil nature of social media and the import and basic joys of familial ties. It is also the story of, as Connors puts it, “A family coming together to fight the ultimate fight and learn that love is more powerful than death.”

One of the hallmarks of all these film festivals is that many of the filmmakers and actors are in attendance and will participate in post-screening gatherings with audience members. These will take place each night at the Dearborn, that fine restaurant and tavern just around the corner from The Siskel Center.

COVID protocols: The Gene Siskel Film Center requires a photo ID, proof of vaccination or a negative COVID-19 test from the past 72 hours. Children under 12 are not currently permitted in the theater; more information at www.siskelfilmcenter.org