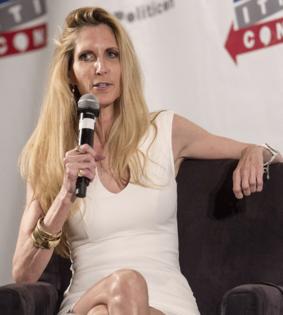 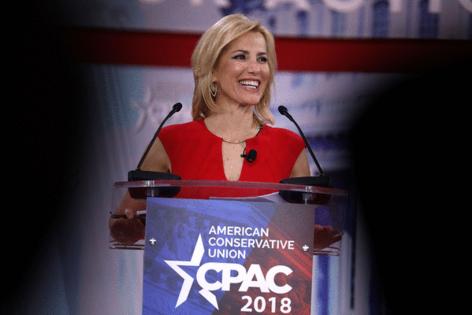 "Impeachment: American Crime Story" chronicles President Bill Clinton's relationship with White House intern Monica Lewinsky, and how it eventually led to his impeachment — turning one of the biggest political scandals in U.S. history into a series so addictive it may as well be pulp fiction.

The third episode in the new installment of Ryan Murphy's "American Crime Story" anthology (previous seasons focused on the O.J. Simpson trial and Andrew Cunanan's murder spree) brings together three of its nastiest characters so far — which is saying a lot given that the series is teeming with duplicitous, attention-seeking creatures of the Beltway sort.

Matt Drudge (Billy Eichner), Ann Coulter (Cobie Smulders) and Laura Ingraham (Kim Matula) converge in the episode, titled "Not to Be Believed," like a perfect storm. Angry and fast-moving, they're gathering energy with the goal of infiltrating the liberal news media with conservative views — facts, vetting and objectivity be damned.

"The Drudge Report is one of the biggest sites on the World Wide Web," says Ingraham while introducing Drudge to her guests. Ingraham was an MSNBC news host and friend of the "elves," a group of attorneys that included Coulter who were helping build a case against the president. Another lawyer from the group, George Conway (George Salazar), is also at the party. He dated Ingraham and is Kellyanne (Conway's) future husband. Yes, the room is full of folks who will play a big role on the Fox News of the future, and in the Trump administration. But for now, they all just want to skewer the Clintons.

On that front, Drudge is making a name for himself. It's impressive, especially since the eccentric gossip columnist was managing a gift shop on the CBS lot a few years prior. The greatest gift, however, was his access to trash bins on the lot. The series shows him finding one of his earliest Hollywood "scoops" — "Seinfeld is the highest paid actor in television!" — while dumpster diving after his shift. He races home to his dingy studio apartment, dials up the internet on a clunky desktop, and sends the story. The legend in his own mind is born.

From then on, Drudge dons a 1930s-style hat and speaks like another relic from that era, radio news commentator and newspaper columnist Walter Winchell. When a real reporter from Newsweek crosses paths with Drudge for the first time, he's taken aback: "Is this for real? The voice? The costume?" asks Michael Isikoff (Danny Jacobs).

"Impeachment" shows how Drudge, along with a constellation of other far-right outsiders, used the Clinton scandal to show folks like Isikoff just how real they were. They would decimate the idea of shared facts, trusted news and credible reporting, largely with angry rhetoric and unsourced hearsay. Clinton (Clive Owen), Lewinsky (Beanie Feldstein), and Linda Tripp (Sarah Paulson) were mere stepping stones.

In the mid-1990s, the Drudge Report was part Hollywood scuttlebutt, part D.C. dish and arrived just in time to take advantage of the new, lawless internet. The dirt-digging site didn't have to adhere to the same editorial standards of established news organizations, so was able to publish eye-popping stories without the same burden of proof. Drudge circumvented Isikoff's scoop about Clinton and Lewinsky's relationship not by confirming the affair itself, but by publishing a story on Newsweek editors' decision to spike Isikoff's reporting. (Isikoff, in the course of reporting on Paula Jones' sexual harassment lawsuit against Clinton, had already interviewed Tripp about Clinton, Lewinsky and Tripp's White House colleague, Kathleen Willey — played by Elizabeth Reaser — who alleged that Clinton groped her in a meeting at the White House in 1993.)

When Coulter meets Drudge in the series, the young, surly attorney is intrigued by the nobody from Los Angeles whose dirt on Clinton boosts her own cause. The elves are helping Jones' legal team prepare briefs in her suit against Clinton. The experience would feed Coulter's bestselling book "High Crimes and Misdemeanors: The Case Against Bill Clinton" and launch her career as a conservative political pundit whose anti-immigrant screeds and "liberal mob" fear-mongering have become a fixture on the right.

She's suspicious of the ridiculous hat and weird accent, but Conway fawns over Drudge: "I've been addicted [to the Drudge Report] ever since you reported that Ken Starr wanted to indict Hillary for perjury," he gushes. "How do you get this stuff?"