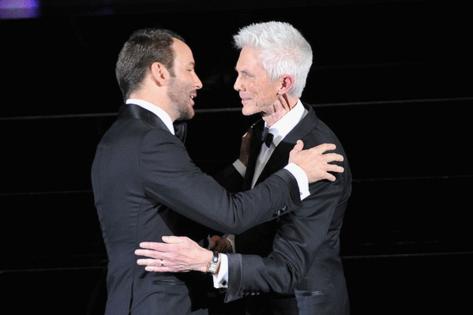 “It is with great sadness that Tom Ford announces the death of his beloved husband of 35 years, Richard Buckley. Richard passed away peacefully at their home in Los Angeles Sunday night with Tom and their son Jack by his side,” a Ford representative said in a statement.

The fashion journalist died of natural causes after a prolonged illness.

Ford, 60, met Buckley, the former editor in chief of Vogue Hommes International, in an elevator at a fashion show in 1986, when the native Texan was 25 and the New Yorker was 38.

Before being named to head up Vogue Hommes in 1999, Buckley did stints at Women’s Wear Daily, Vanity Fair and Mirabella after getting his start at New York magazine in 1979.

“Our eyes locked and within a month we were living together,” Ford once told People about meeting Buckley. “We have been together ever since.”

Ford added, “By the time that elevator landed on the ground floor I thought, ‘You’re the one.’ That’s it. Click. Sold. It was literally love at first sight.”

The couple’s son, Alexander John Buckley Ford, was born in September 2012 via a surrogate.

Buckley and family had moved to Los Angeles in recent years, after Ford bought the estate of the late socialite Betsy Bloomingdale in 2016, though they reportedly kept their London residence as well.

The designer said in April 2014 that he and Buckley had gotten married in the U.S. Fourteen months later, a Supreme Court ruling would make same-sex marriage legal in all 50 states.