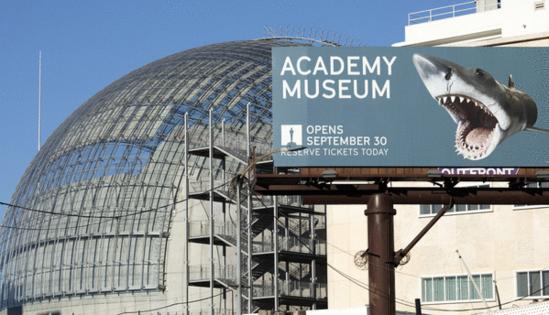 LOS ANGELES — Tucked away throughout the Academy Museum of Motion Pictures' "Stories of Cinema" galleries are many stations of respite — little built-in rest zones where you can sit and let your movie-loving eyes and mind wander.

One of these, a circular room titled "Behold," is essentially the museum's version of a planetarium show, where you can envelop yourself in scenes from "2001: A Space Odyssey," "Blade Runner," "A Trip to the Moon," both versions of "Solaris" and other science-fiction touchstones, their otherworldly images playing out on a curved three-panel screen.

Another spot, in the deeply transporting Hayao Miyazaki gallery, is an artificial knoll where you can lie back and stare up at a patch of blue sky, much as the characters do in "Kiki's Delivery Service," "Castle in the Sky" and other Miyazaki animated wonderments. Luxuriating for a moment in the faux grass, I was also reminded of the cloud-watching young hero of Richard Linklater's "Boyhood" — a live-action non sequitur, perhaps, but also the kind of cinematic free-association this museum exists to encourage.

After an afternoon spent dutifully ooh-ing and ahh-ing at Rosebud sleds and ruby slippers, you will likely welcome these opportunities to stop, sit and process. I certainly did during the two brisk, overwhelming tours I've taken of the Academy Museum in recent weeks, ahead of its official opening at the end of this month. There is a great deal to see here, and even more to think about. There are ancient woodblock prints, magic lanterns and other early pre-cinema innovations, as well as matte paintings and miniatures from a later era of hand-crafted, pre-digital movie magic. There are "Black Panther" suits and "Star Wars" droids and "Alien" Xenomorphs, plus visual primers on the craft of first-rate artisans such as editor Thelma Schoonmaker and cinematographer Emmanuel Lubezki.

There are Bruce Lee one-sheets, faded pages from Robert Towne's "Chinatown" screenplay and the carefully preserved May Queen gown that Andrea Flesch designed for "Midsommar." There is an entire room devoted to the making and legacy of "The Wizard of Oz," and if that all-timer feels like too obvious a centerpiece for a museum devoted to the marvels of the Dream Factory (it will kick off the museum's film program with two Sept. 30 screenings in the new 1,000-seat David Geffen Theater), you won't catch me complaining.

But perhaps the most notable alcoves of the Academy Museum are those where it resists the obvious, or at least takes a break from celebrating the already amply celebrated. As you pause to admire a Winsor McCay drawing or read about the pioneering work of Oscar Micheaux and Alice Guy-Blache, you may marvel at the range of film history the curators have sought to compress into some 250,000 square feet of viewing space. You will also of course be struck by how much more history remains left out, to be covered (or not) in future incarnations. (A perpetual work-in-progress, the museum plans to keep rotating and refreshing its exhibitions year after year.)

And the history of cinema is not the only thing being commemorated within the painstakingly refurbished walls of the former May Co. building. The museum is also, of course, a dedicated permanent shrine to the Academy Awards, a nearly 94-year-old institution that has long been the academy's grandest, most celebrated and most dubious contribution to the history of the movies. Most of the Oscar-themed attractions are fittingly encased within the gold-plated cylindrical structure that anchors the museum's southwest corner, and which seems to have waited decades for just this purpose. Here can be found an Oscars gallery, with 20 or so winners' trophies displayed in cases like the heads of Princess Mombi, and something called the Oscars Experience, where visitors can pose with a statuette and record their own acceptance speeches.

That last attraction might sound like a waste of space, a frivolous, vulgarizing touch. But it also feels like an honest admission of purpose from an academy that has often embraced silliness along with seriousness, and indeed frequently confused one for the other. It acknowledges a fundamental tension within the motion picture academy itself, which uses the Oscars to present a culturally prestigious, commercially successful image of the movie industry. The Oscars in turn finance — but also overshadow — the academy's quieter, nobler mission of film education, preservation and research, undertaken and safeguarded by its voluminous archives and libraries.

Some of that instructional work now falls to the Academy Museum, which must shoulder the weight of those contradictory aims and straddle the divide between art and commerce — and between education and entertainment — in ways that no other museum dedicated to no other art form would be expected to do. It must reaffirm the power of the movies as a great popular medium, while also shining a light on significant works of art that have long been overlooked in the name of an industry popularity contest. To put it another way, it must celebrate the Oscars with one hand and acknowledge the rich cinematic history that the Oscars have long neglected with the other.

This is a tricky but not impossible task, as senior director of curatorial affairs Doris Berger and her team have deftly demonstrated here. To wit: Their salute to "Citizen Kane" (which, it's worth remembering, was egregiously underloved by the academy in its day, with nine nominations but only one trophy) sits beside a tribute to Patricia Cardoso's under-appreciated 2002 independent drama, "Real Women Have Curves" (total Oscar nominations: zero) — a playful yet pointed juxtaposition meant to turn our sense of the American film canon on its head.