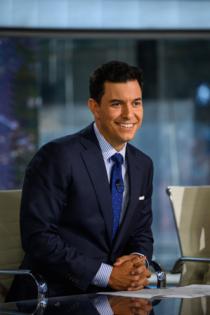 It's possible that the future of NBC News started in a Miami dentist office.

The Cuban immigrant father of the network's newest anchor, Tom Llamas, had a dental practice in the city where he treated the children of Jorge Ramos, the renowned TV journalist at the Spanish-language network Univision. Luis Llamas told Ramos that his then-15-year-old son had an interest in journalism and asked about getting him a tour of the network's newsroom.

"I said 'absolutely,'" Ramos recalled in a recent interview. "When I met Tom, he was totally committed. He was observing everything in the studio. I knew he was going to be a great reporter."

Twenty-seven years later, Llamas, 42, will be the lead anchor of a new nightly newscast, "Top Story With Tom Llamas," for NBC News Now, a free full-time streaming service using the resources of the news division, including NBCUniversal's Spanish-language network Telemundo. Starting this week, the hourlong newscast will stream live nightly at 7 p.m. ET, with repeats throughout the evening, and will also be available on demand.

The launch represents a significant commitment to NBC News Now, the channel aimed at capturing viewers who are leaving traditional television for online streaming. NBC News says users spent 20 million hours watching the 2-year-old channel in August, up 147% from the same month in 2020.

The new program also marks a professional homecoming for Llamas. After graduating from Loyola University New Orleans, he started out in 2000 as a production assistant at NBC News. He worked his way up as a correspondent for its Miami station and a local anchor for WNBC in New York.

Llamas jumped to ABC News in 2014, where he developed a high profile covering the 2016 presidential campaign and in 2017 was named Saturday anchor of "ABC World News." His return to NBC earlier this year led to chatter in the TV news business that he is being groomed to eventually succeed Lester Holt as anchor of "NBC Nightly News."

"I will leave that speculation to others," said NBC News President Noah Oppenheim when asked about the long-term plans for Llamas. "We absolutely expect him to be at NBC News for a long time. He will report for our various platforms and there is really no bigger priority right now than NBC News Now."

The hourlong format for "Top Story" will give Llamas the chance to cover a wider range of topics than a half-hour broadcast network evening newscast. He is using the time to include a nightly segment called "The Americas," focusing on Latino issues in the U.S. and Latin American countries at a time when immigration at the southern border remains an intractable issue.

"If you want to know why immigration is a problem, you've got know what's happening in those countries," Llamas said in a Zoom call from his home in Manhattan, where he lives with his wife, Jennifer, a former NBC News producer, and three young children. "We're committed to doing it."