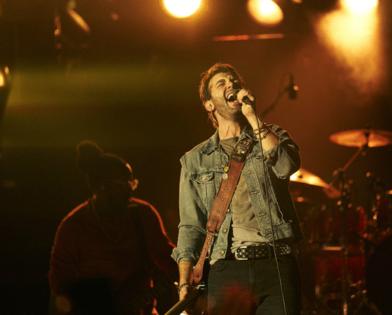 In NBC’s “Ordinary Joe,” which premiered Monday, the man in question sees three different versions of his life play out. In one, he’s a nurse, another a police officer, the last a rock star.

“It’s an absolutely fascinating story about the idea of choice and how that can drastically change our lives, the road we take and who we become,” star James Wolk told the Daily News.

“Everyone has that, where you go ‘what if?’ We don’t all get to see our what ifs play out. In this story, we will, and we’ll see what becomes of Joe and the other characters of the show.”

The three storylines play out simultaneously, jumping between worlds with some plots spilling over, including ones that include sometimes love interest Amy (Natalie Martinez) and sometimes wife Jenny (Elizabeth Lail). All three Joes are relatively successful but each is fighting for something more.

“Take Music Joe for example: monetarily, he’s very successful, but personally, and as the series continues, you’ll see he’s very raw in his mind and he’s desperately wanting to have a child, but he and his wife are having trouble conceiving,” Wolk said. “In his mind, he has all the outer riches but he’s also the guy who’s kind of lonely and he and his wife are having issues. He has great challenges, they’re just not monetary.

“Then you go to someone like Cop Joe and he’s doing fine, he’s a successful police officer, but his personal challenges are huge. He carries a deep, deep burden, a deep sense of guilt, for what happened to his father … As the series goes on, you’ll see he feels complicit in his father’s passing. For him, he’s frozen in time. He still lives at home, he’s trying to keep his childhood alive.”

The challenge for Wolk, 36, came in finding something to love in each Joe — the Friday night ziti dinners with his big Queens family or the leap of faith it takes to pursue music (much like acting, he joked).

“You just start to find different quirks with them and that becomes the character,” he said.

Unlike 1998′s “Sliding Doors,” which saw Gwyneth Paltrow living out two scenarios, Joe’s inciting incident is a more familiar choice: What’s a college kid to do with the whole world ahead of him?

For Wolk, it was important that each option felt plausible. Even Music Joe is famous in a way that seemed natural for a guy who would have been a nurse or a cop in another life.

“I think Joe is Joe no matter which world you’re in,” Wolk said. “For him, a happy ending is a happy family. He’s driving for that in every life.”