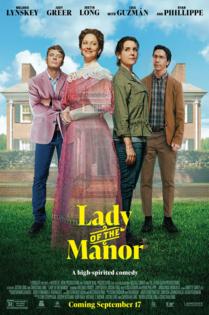 The friendship between a 19th-century ghost and a present-day pothead is unlikely movie fare — until you hear its genesis.

“The idea came from (when) we were smoking some weed,” Justin Long told the Daily News.

The 43-year-old actor, who co-wrote and co-directed the film with his brother Christian, joked that’s “always a good start to a story about an accomplishment that you’ve done.”

The result was “The Lady of the Manor,” the feature-film directorial debut for both Long brothers, which is available online and in select theaters. The movie explores the sensibilities of a modern-day woman, who can barely get a grip on her life, let alone the irritated ghost in the house where she works.

Justin Long is a familiar face in films such as “Jeepers Creepers” and “He Just Not That Into You.” He and brother Christian set out to make a different kind of buddy picture.

“We like the idea of a ghost just being annoying rather than scary,” Justin said of the “female bro comedy.”

“Lady” sees spacey, recently unemployed Hannah (Melanie Lynskey) embracing her role as the tour guide of a historic Savannah manor, which is owned by the family of spoiled man-child Tanner Wadsworth (Ryan Phillippe). She enjoys it until Lady Wadsworth (Judy Greer), whose spirit she’s meant to embody, is grossly offended by her.

Turbulent race relations and plain old racism — both in Lady Wadsworth’s Reconstruction Era and the present day — are nodded to but largely disregarded in this incarnation of the Deep South.

“I’d always been a fan of Justin as a comedic actor and like, his sense of humor and so much of him and his brother are in this script,” Phillippe, 47, told The News. “And so I loved it and this character... was such an opportunity to be silly and to be able to play.

He said that his role left him with “so much freedom and license to just kind of let it rip, you know?”