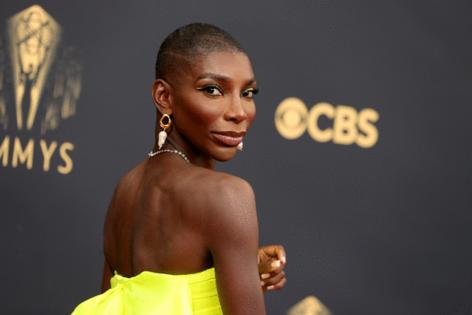 Amid the preordained “Ted Lasso” hardware roundup Sunday, and the expected big nights for “The Queen’s Gambit” and “The Crown,” the Emmy Award winner I loved most also occasioned the most succinctly eloquent acceptance speech.

Here’s what Michaela Coel, creator, writer, star and co-director of the 12-episode stunner “I May Destroy You,” had to say after her writing win in the limited series, movie or drama special category in a message to her fellow writers:

“Write the tale that scares you, that makes you feel uncertain, that isn’t comfortable. I dare you. In a world that entices us to browse through the lives of others to help us better determine how we feel about ourselves, and to in turn feel the need to be constantly visible, for visibility these days seems to somehow equate to success — do not be afraid to disappear. From it. From us. For a while. And see what comes to you in the silence.”

Now there’s a writer. And there’s a winner who doesn’t squander a word of Emmy ceremony stage time, as opposed to “Queen’s Gambit” director Scott Frank, who took his time and enjoyed his little moment and turned a thank-you speech of under four minutes into a purgatory that felt like it concluded sometime after the setting of “Dune.”

A contemporary London story in no way akin to “Ted Lasso,” “I May Destroy You” premiered on HBO and BBC 1 last June. If you haven’t seen it yet, see it. I realize an Emmy win for writing historically has little influence on a mass audience’s catch-up streaming habits. Then again, we’re all playing catch-up. All the time.

Coel poured her own experiences into the series’ witty, devastating, searching story of a date rape; an uneasy, unfulfilled culture of sexual consent; and a protagonist examining her suspended-animation present and her foggy recent past. It’s a tonally complex masterwork of the form.

I know a lot of folks who have put off “I May Destroy You” because of its harsh subject matter, or its daunting array of London dialects, both of which, yes, are heavy. Subtitles are an option, however. Regarding the former: Coel’s fiercely engaged work proceeds with such an unpredictably effective blend of comedy and drama, the results are bracing, cathartic — not crushing.

After the Golden Globes failed (let us count the ways) to even nominate Coel’s achievement, in any category, attention in the U.S. needed to be paid. “I May Destroy You” made its mark every way in England, measuring by awards, cultural conversation, even ratings. Sunday’s ceremony didn’t recognize the worth of the 12-part series in full, or even half-full. (It was up for nine Emmys.) But Coel’s writing was a start.

This is why we still care a little about things like Emmys, or Oscars, or Grammys, waning cultural currency or ratings be damned. To see our dear pandemic favorites win a lot, yes. Emmys for Hannah Waddingham and Brett Goldstein in “Ted Lasso”? Yep! And thanks to both, working in very different comic keys, for going to town every episode, even when the material needed another pass.

Awards also remind us to make time for what we haven’t seen. Our screen lives dry up pretty quickly if we don’t remember what the shock, the satisfaction and the discovery of the new can do to us. And for us.

How to watch: “I May Destroy You” streams on HBO Max, and it’s $1.99 per episode on just about every service imaginable.