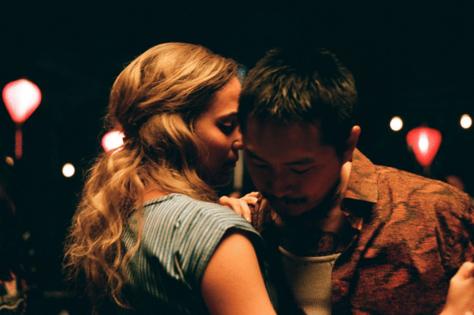 The film tells the story of a Korean-born man who faces deportation from the United States, despite being adopted by an American family when he was 3.

Chon wrote and directed the movie, and also stars as Antonio LeBlanc, who’s expecting a child with his wife, played by Vikander, when he’s confronted by a racist police officer.

“I found out about this issue around 2016, that adoptees were being deported, and I just really felt emotionally connected,” Chon told the Daily News. “The idea of international adoption originated from Korea, and I have quite a bit of Korean adoptee friends. The thought that you could be brought over to this country by U.S. citizens, and then 30 years later find out that you’re not ... sounds absolutely ludicrous.”

International adoptions began in 1955, when Henry and Bertha Holt, an evangelical couple from rural Oregon, secured a special act of Congress enabling them to adopt Korean “war orphans.” Adoptees are now protected under the Child Citizenship Act of 2000, but the law didn’t retroactively grant citizenship to adults already living in the U.S. at that time.

“Blue Bayou,” now in theaters, aims to put a face to the issue.

“There’s a lot of these stories, and I couldn’t understand that this was legally doable, that any functioning society could actually go ahead and kick somebody out,” Vikander told The News. “If anything, I hope that these people will in some way find a way back.”

Set in rural Louisiana, the film depicts Vikander’s Kathy as the mother of a young girl from a previous relationship with a cop who walked out on them.

Her ex’s police partner brutalizes and arrests Chon’s character after an encounter at a grocery store, beginning the process for him to be deported.

The Swedish-born Vikander, who won an Oscar for “The Danish Girl” and played Lara Croft in 2018′s “Tomb Raider,” says her new movie has “an important story to tell.”

“Filmmaking and culture as a whole is the best way sometimes to highlight issues like this, because it’s easy to go in and read the news every day, but sometimes it just becomes one after another,” Vikander said. “By reading a book or hearing a song or watching a film, you have an easier time to actually get an emotional connection to these stories.”

Chon’s research for the movie included consulting with immigration lawyers, reading about deportation cases and speaking with adoptees.

“I just had a lot of time to ingest a lot of different stories and experiences that people have had, and integrated it into my performance,” Chon said. “And then also, what does it feel like to be an Asian-American in the South? That’s a particular thing as well. I have a lot of friends from New Orleans, and it’s one of the reasons I placed it in the South. I feel like that aspect of the Asian-American experience hasn’t fully been explored.”

Chon, 40, and Vikander, 32, both spent time in Louisiana before production began to prepare for their roles.

“These snapshots in time, I think, allow for conversations to happen,” Chon said. “That’s very important for me when making a film, to bring up these things, and afterwards for people to talk about the issues or talk about their own experiences.”

“Through culture, you’re presented a fact or something that you didn’t know before,” Vikander said. “I love when that then becomes the reason for you to go and seek out more information. That’s what happened when I read this script. I did not know that this was a reality. I did not know that so many adopted children have been forced out of their homes and away from their families.”

Paul McCartney sits in a chair, bass guitar propped on his knees, and plucks out a riff — nothing fancy, not yet, though he can tell he might be onto something. (His years in the world’s biggest rock band have ...Read More

"This was the version with Mandy Patinkin and Bernadette ...Read More

Stephen Sondheim fans all have their own benchmarks of discovery. First time I fell in love with an original Broadway cast album: age 14, maybe 15, ”A Funny Thing Happened on the Way to the Forum,” checked out from the...Read More

CHICAGO — Stephen Sondheim’s death Friday left a gaping hole in the hearts of those who work in the Chicago theater. The iconic composer and lyricist visited relatively often (including a 2011 visit to receive the ...Read More

CHICAGO — Artist Jessica Disu, who performs as FM Supreme, may be a Chicagoan, but on the day that we spoke, Disu was in Washington, D.C. Her plan? To support the young students at Howard University in their protests ...Read More

But what to watch, an old-time favorite or a new-school entry in the Christmas canon? There are plenty of both available across the top streaming services, and that's without resorting to watching the latest big-city-ad-...Read More