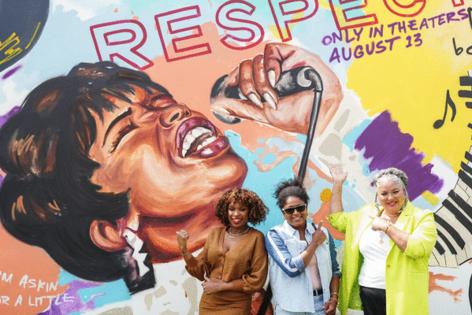 The mural — dynamic and bold, as so much of Kelly's work is — features Isabella with pineapple-accented sunglasses, her curly hair in pigtails. Slices of different kinds of fruit are layered in the background.

"I wanted to add more personality to it, color, make it resemble one of my pieces you'd find on canvas," said Kelly of the mural on the Meijer store that opens early next month.

Personality-infused art has become one of Kelly's specialties. No wonder her work is popping up all over the city.

Before her Rivertown piece on Jeffe, Kelly unveiled her new Aretha Franklin-inspired mural in August, just in time for the release of the movie "Respect." Instead of painting Franklin, she was asked to paint actress Jennifer Hudson depicting the Queen of Soul. The mural, which had an interactive element to it with music, was in front of the Charles H. Wright Museum of African American History.

"The whole idea was to not portray Aretha but Jennifer," said Kelly, 31, who was commissioned to paint the mural by an agency working on the movie.

Capturing Hudson as Franklin was a little nerve-wracking, admits Kelly. But the response has been great, she said.

"I actually painted it at the studio at the Russell (Industrial Center) and then installed it," said Kelly. "As soon as we put it up, people were kind of gravitating toward it... It's totally a new concept."

Born and raised in Detroit, Kelly was drawn to the arts even as a child, though she never planned on it as a career. She studied graphic design at Wayne State University and worked at the Metro Times as a production manager and senior graphic designer.

But even there, she was always encouraged to paint, she said. After leaving the Metro Times in 2014, "portraits were something I've always done but eventually it just evolved into being a full-time portrait artist," Kelly said.

And Kelly's portfolio is filled with portraits of iconic Michigan artists beyond the Queen of Soul — Eminem, Madonna, Jack White, Diana Ross, Kid Rock. She says she's known for her distinctive mix of street art and traditional oil technique. The Charles H. Wright museum purchased another Queen of Soul portrait she painted. And she painted an Aretha mural at Eastern Market.

Recently, she painted portraits of nine Black baseball players that were featured in a special Washington Post section detailing the decline of African-American players in baseball.

"That was a fun, fun project," said Kelly, who painted each portrait by hand.

Next, Kelly will unveil another mural at the end of the month in Detroit for a nonprofit, though she can't share many details yet. Being a portrait artist, Kelly said the best part is the variety of projects she's asked to do.

"It's great that it's different every time," she said.