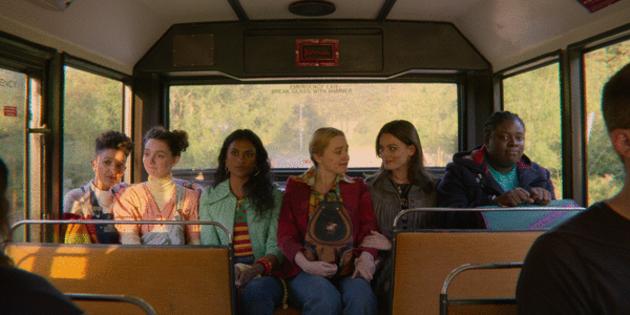 LOS ANGELES — As the creator and top-billed executive producer of "Sex Education," Laurie Nunn has collaborated with several writers while humorously weaving the awkward, messy sex lives of teenagers navigating the highs and lows of adolescence at a fictional high school in Wales.

But the seventh episode of Season 2 — about a student grappling with the trauma of a recent sexual assault — was an installment she knew she had to write alone.

"It was quite a personal story for me," Nunn said. "I had experienced a sexual assault on a local bus a few years before running that writers room, and I knew this was something I wanted to process in a cathartic way through writing."

Directed by Ben Taylor, the episode explores the aftermath of an incident in which Aimee (Aimee Lou Wood) is violated on a public bus by a man who masturbates and ejaculates on her favorite pair of jeans.

Throughout Season 2, the typically cheerful and sweet Aimee is haunted by hallucinations of her attacker, triggered by her boyfriend's touch and terrified of riding the bus. She walks to school every morning.

"We wanted this image of her not being able to get on the bus," Nunn said. "And this very small, everyday event becomes this huge mountain she has to climb."

Aimee's anguish finally catches up to her in Episode 7, which sees her, Maeve (Emma Mackey), Ola (Patricia Allison), Olivia (Simone Ashley), Lily (Tanya Reynolds) and Viv (Chinenye Ezeudu) serve detention for allegedly slut-shaming a teacher. While the other girls bicker over hobbies and boys, Aimee erupts in tears.

"I can't get on the bus," she whimpers. Instantly, her classmates forget their differences and go into support mode. All of them trade stories of sexual harassment and assault — the only thing they seem to have in common.

The "Breakfast Club"-esque detention sequence sets the stage for what fans of "Sex Education" have affectionately dubbed "the bus scene." At the very end of the episode, Aimee approaches the bus stop to find all five girls waiting for her.