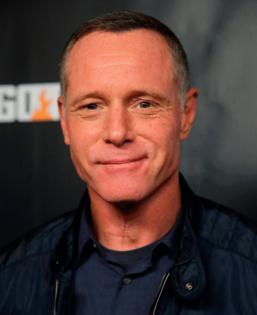 Jason Beghe's gruff voice sets him apart when he portrays troubled police Officer Hank Voight on NBC's "Chicago P.D." The actor has also used it to great effect playing tough guys and paying his dues in "G.I. Jane," "Thelma and Louise" and other movies and TV shows.

Beghe's rough voice is the result of a near-fatal car accident in 1999. He had to be intubated, and his vocal cords were injured when he pulled out the tube. He is also known as a former Scientologist who has spoken out about the group, producing a two-hour YouTube video describing the dangers of what some call a cult.

The new season of "Chicago P.D." debuts Wednesday at 10 p.m.

A. Ever since I started playing Hank Voight, I've found that I've killed a lot more people in my personal life. I slapped a guy at 7-Eleven when he gave me the wrong change yesterday. I'm kidding! (laughs) Honestly, after all this time, it becomes like a close personal relationship. And like any good close relationship, I'm sure we learn from and influence each other.

Q. Do you ever dream in character?

A. I always dream out of character. Usually I'm an old woman. Occasionally a reptile.

Q. Every decision we make has the potential to change our future. Would you share one you consider a most consequential choice?

A. When I got the script and the offer to do a recurring role on "Chicago Fire," I was in the middle of a lot of personal stuff. Both my parents had just died, and I wasn't sure that I was going to accept the job. But I ultimately decided to do it. Interestingly, I left to shoot my first day on "Chicago Fire" from my father's funeral in Washington D.C. The many ways in which that decision has changed my life could fill a book. Suffice it to say, I'm happy I made that choice.

Q. You nearly died in a car accident more than two decades ago. Often people say coming so close to dying changes them, gives them a newfound reverence for life. Does the feeling wear off?

A. Technically, I did die for a short period of time when I was in the coma. That was definitely an experience that profoundly informed my perception of what life is. Twenty years later, it's not something I think about very often. But as you bring it up to me, I do believe that I've probably permanently changed since then.

Q. Any insights gained from playing a law enforcement officer?

A. Many. The most overriding thing would be that I probably used to think of cops as cops. I now am fully and consciously aware that they are each human beings, with full, unique lives and that law enforcement is the job they do. So now whenever I see a cop, I see a person who is a cop, not just a cop.

Bonus Question: What is the most feminine thing about you?

What it’s about: A young fashion student forges a psychic connection with an aspiring singer in ...Read More

So, what happens when you hand a massive Marvel Comics Universe movie to a brilliant maker of small-scale, meditative independent movies? Something different, it turns out — not always in a good way, but definitely ...Read More