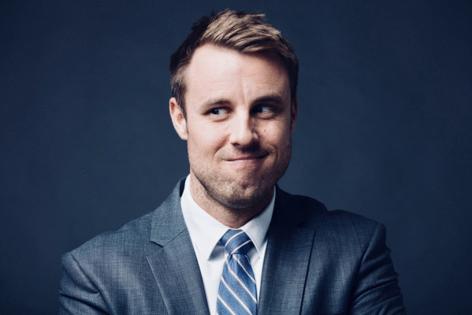 CHICAGO — Five years ago, a Twitter account with the handle Chicago Party Aunt appeared out of the digital mist as if conjured to life by the spirit of Bill Swerski and those old “Saturday Night Live” Super Fans sketches from the ‘90s.

An affectionate riff on a specific and proudly old school Chicago personality, the Chicago Party Aunt’s bawdy white lady exploits are legendary (in her own mind). Consider this exchange: Last month, the Billy Goat Tavern tweeted out a photo of two bar stools with the caption: “Every bar stool has a story.” Chicago Party Aunt’s reply: “I made out with Mike Royko on the one on the left!”

Now she’s the star of her own Netflix animated comedy and she has a name: Diane Dunbrowski. Or just Dye-yaaan in Chicagoese.

The account’s boozy namesake is the creation of Chicago sketch and improv veteran Chris Witaske, who has remained anonymous until now. His co-creators on the show, Jon Barinholtz (“Superstore”) and Katie Rich (a writer on “SNL”), are also alumni of the city’s comedy scene, as is Lauren Ash (also of “Superstore”), who voices the title character.

Despite the Chicago-ness of the Twitter account and the show itself, Witaske actually grew up in St. Charles. “I’m a western suburb kid,” he said. “But I will say: Grandparents are from Chicago. Dad is from Chicago; I don’t know why he moved us out to the ‘burbs for my childhood, but I lived in the city for many years after college.”

I talked with Witaske, who is based in Los Angeles these days, about how this still-active Twitter account that’s filled with Chicago in-jokes became a Netflix series.

Q: What’s the story behind the Chicago Party Aunt as a Twitter character?

A: So, I know a lot of ladies who are like this (laughs). I have a lot of aunts who are like this character. And I worked at Mike Ditka’s restaurant for five years after college and I saw a lot of Chicago Party Aunts come through that place. I think I just kind of soaked it in, observing these women in their natural habitat. And I thought it would be a great character to churn out jokes on Twitter — to put everything through her point of view — and it turns out I was right, because people really connected with it.

Q: She’s the female equivalent of a Grabowski.

A: Completely, a hundred percent. I grew up watching that “SNL” sketch with the Super Fans, so that was an inspiration. But it’s also kind of different: It’s this very specific woman who you see a lot in Chicago with the spiky hair and the bedazzled jeans and she’s not afraid to have some wine with lunch. I was just back in the city recently, I threw out the first pitch at a Cubs game, and I saw probably seven Chicago Party Aunts just walking around.