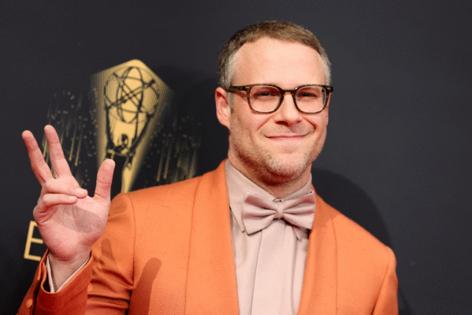 Sunday night saw the second pandemic-era edition of the Emmy Awards (the 73rd, all told, and can you believe television has been around that long?), which opened as if it were the first Emmys of the post-pandemic era. From pre-broadcast reports, one might have expected some kind of socially distanced outdoor production. But what transpired, from the Event Deck of L.A. Live, was a ball, with dinner tables, like the Golden Globes but in a tent and minus the hotel.

“Some of y’all thought this celebration would be more subdued, kind of like an Emmys light, but that’s not the way this host treats his best friend,” said host Cedric the Entertainer after a cold open designed to give the impression that these Emmys, broadcast this year over CBS, would be another Zoom-style, socially distanced, here-and-there affair. (It was almost all here, with very little there.) This led to a ballroom-wide take on the late Biz Markie’s “Just a Friend” — television, it’s your friend — that saw many of the presumably vaccinated attendees participating, filling the room with aerosol and engaging in whatever the opposite of social distancing is, delta variant and breakthrough notwithstanding. Well, it was fun, if nerve-racking.

The decision to party like it was 2019 was perhaps not out of key with the national mood and in some perverse way not inappropriate to a medium whose productions have mostly pretended, even in the thick of it, that the pandemic never happened, isn’t happening or is a thing of the past. Nevertheless! Whether or not his surprise was disingenuous, or even meant to preempt criticism, first presenter Seth Rogen put into words what more viewers than I must have been thinking:

“Let me start by saying: there’s way too many of us in this little room. They said this was outdoors — it’s not! They lied to us. We’re in a hermetically sealed tent right now …. I would not have come to this. Why is there a roof? It’s more important that we have three chandeliers than that we make sure we don’t kill Eugene Levy tonight. That is what has been decided.”

Cedric returned for a monologue after the first two awards, and he came on strong in a production that seemed determined not to let the energy flag, and in fact did an unusually good job of making three and a quarter hours seem like no more than two and a quarter. “Lock the doors, we’re not leaving till we find a new host for ‘Jeopardy!’” said Cedric. There was a vaccination joke, a Met Gala-related joke about “everybody dressed up like regular rich folks.” He noted the unique challenge to a being a Black host of the Emmys. “Because my people they expect that I can just give an award to anybody. Black people are like ‘Yo Ced, come on man, you got to give Martin Lawrence an Emmy. And not just Martin, see, you got to give Sheneneh one too.’ I’m like, ‘That’s the same person dog.’ Jimmy Kimmel don’t have that problem.”

Along with the host, the evening’s deejay Reggie Watts and announcer MC Lyte, and Leon Bridges, who performed behind the “In Memoriam” segment (which somehow gets harder to watch every year — you’ll understand that eventually if you don’t yet), there was a satisfying degree of diversity among the presenters, almost as if in expectation that there would not be much among the winners, which indeed was the case. Apart from the cast of “Saturday Night Live,” the exceptions were “RuPaul’s Drag Race,” Michaela Coel for writing “I May Destroy You” (a series, itself in competition, for which she was also nominated for acting and directing), “Hamilton” and a Governors Award to Debbie Allen, who, looking back on all the hurdles she had to leap to finally stand there, delivered one of the evening’s few remotely political remarks: “Let this moment resonate with women across the world, from Texas to Afghanistan.” (The late Michael K. Williams, nominated for “Lovecraft Country,” was perhaps the most notable loss by a person of color; not surprisingly, Williams was chosen to close the memorial segment.)

Indeed, the Emmy Awards as a program, if not as a result, time and again signaled that the medium was doing better in advancing programs that served the underserved than its voting body was in recognizing them; indeed, it was exciting to see co-creator Sterlin Harjo and the cast of “Reservation Dogs,” perhaps my favorite new show of 2021, onstage together, bodily and vocally, and happily, announcing the much belated arrival of Indigenous American television.

Still, that most of the prizes went to a relatively few crowd-pleasers should not be surprising, given that this is the history of the Emmys — departures from the obvious are celebrated as if a new era may be dawning, but these are mostly false dawns, awaiting substantial changes in both the voting body and the industry to which it belongs. At the same time — all those winners, they’re good!

Indeed, the only legitimate takeaway from any awards show, apart from whatever sociopolitical analysis the evening affords, is that prizes tend to go where you think they will, and that many who are not chosen are never even called. A very funny filmed piece featuring Cedric, Scott Bakula, Jason Alexander, Zooey Deschanel and Alyson Hannigan in a support group for actors who have never won or been nominated for an Emmy, with Fred Savage directing. (“Oh well, that’s validating,” said Hannigan when Cedric pointed out that she’d won a TV Guide Award for “Buffy the Vampire Slayer.”) The introduction of Dr. Phil to the end was a bit of a bring-down, but his advice — “Get yourself booked on ‘Ted Lasso’ or ‘The Crown’” — was proved accurate across the night.