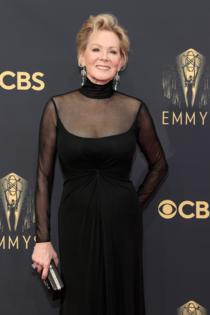 The sweet, hysterical Apple TV+ comedy about an American college football coach who lands a gig with an English soccer team cleaned up at the Emmys Sunday night, dominating the comedy categories and taking home seven trophies, including outstanding comedy series, lead actor and supporting actor and actress.

“Heck of a year,” deadpanned star Jason Sudeikis, who traded in his soccer kit for a velvet tuxedo and shaved off his now famous mustache, while accepting his award for lead actor in a comedy series.

Hannah Waddingham won the first trophy of the night for supporting actress in a comedy for her celebrated role as AFC Richmond owner Rebecca Welton.

“There’s no Rebecca without Keeley and if I ever lose you, I will stalk you,” she said through tears to co-star Juno Temple, who was nominated in the same category, in a sweet moment that brought Temple to tears.

Waddingham’s co-star, Brett Goldstein, followed with his own win for supporting actor in a comedy.

“I was very specifically told I was not allowed to swear,” he joked, a nod to his character, the foul-mouthed Roy Kent, before immediately being bleeped out by the CBS censors. “This cast makes me sick they’re so good.”

On the drama side, Sunday night’s ceremony wore its “Crown” held high as Netflix’s royal drama scored big, with a win for outstanding drama and individual acting awards for Olivia Colman and Josh O’Connor.

In a huge surprise, Tobias Menzies beat Michael K. Williams for supporting actor in a drama series, which was expected to be the Brooklyn actor’s first — and now posthumous — Emmy; Williams died earlier this month from a suspected overdose.