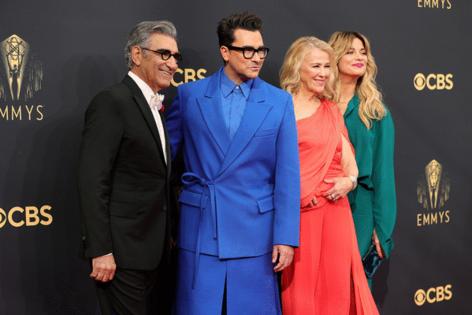 Miss the show “Schitt’s Creek”? Well, there’s not much we can do about that — but . But allow us to share that there was a the You’re in luck: A mini Rose family reunion happened onstage Sunday at the 73rd Primetime Emmy Awards.

After the final season of the comedy swept the awards show last year, stars Dan Levy, Catherine O’Hara, Annie Murphy and Eugene Levy took the stage in person this year to present the award for comedy writing — only to learn that the teleprompter for their introductory bit was completely blank.

The cast was left to improvise, which shouldn’t have been a problem for SCTV vets O’Hara and Eugene Levy.

Dan Levy, not surprisingly, was incredulous.

“Why would anyone want to embarrass us on national television on purpose,” he asked his dad, perhaps making good on last year’s promise that the internet would turn on them because of the number of awards they collected in 2020.

“Eugene, did you do something?” O’Hara asked.

But the elder Levy, hearkening back to Johnny Rose, said he didn’t do anything. On purpose anyway.

“I may have passed the writers room and asked them to lift the dialogue a little bit,” he admitted.

And yes, “lift” was the word he used, meaning he wanted them to “tighten it up a little,” not completely take it away.

Eugene Levy was then left out of reading the lines that magically appeared for the next awards presentation.

“They’ve taken away my lines!” he said.

But it left more room for O’Hara’s wonky intonations when the group introduced the nominees for directing in a comedy series.

Then a signature “Schitt’s Creek” feel-good moment followed, when the elder Levy’s former costars let him read the winner’s name out loud.