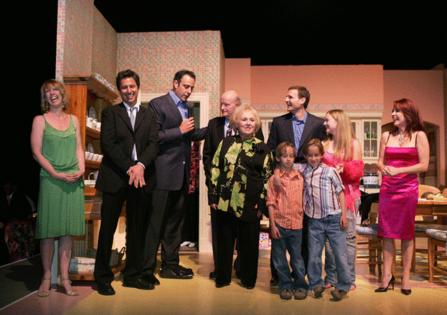 While speaking to Yahoo Entertainment, the show’s creator Phil Rosenthal explained that in fact, “CBS wanted someone hotter to play Debra.”

Before producers eventually casted Heaton, Rosenthal met with an unnamed actress who was pushed forward by network executives. He wasn’t thrilled with what he saw.

“I thought she was wrong, but I met with her and she was a very pleasant, very nice person,” Rosenthal said. “She wasn’t going to read for the role but during the meeting, I convinced her to read a little bit with me,” he said. “And she was 10 times worse for the part than I thought she would be!”

In a network meeting with network executives including disgraced former CBS CEO Les Moonves, Rosenthal had three people in mind with who he wanted to play the role of Debra including the network’s pick. With some convincing, Rosenthal managed to get CBS heads to approve a continued search for the right actress.

“I said, ‘I love her and I’ve loved everything she’s been in,” Rosenthal recalled saying during the meeting. “I think she’s terrific and beautiful, but then she read for me and I have to tell you it’s just not what I wrote. I just don’t see them as a couple. I think she could do it, but I also think that maybe we could do better,’” he recalled. “[Les] said, ‘Well, it’s just an idea.’ In other words, he let me slide and we agreed to keep looking!”

“Two weeks later, Patty walked in and within five minutes she had the part. When it’s right, it’s right, and you know it immediately,” he continued.

“Everybody Loves Raymond” would go on to run for nine seasons between 1996 and 2005 and achieved great success centered around the plot of the life of Ray Barone, a sports columnist, and his overbearing Italian-American family.

In 2018, Romano was asked about a revival of the show, to which he quickly shut down the idea citing the deaths of Doris Roberts and Peter Boyle who played Ray’s parents and were adored by fans.

“(Phil Rosenthal and I) both agree. The parents are gone. Both parents are gone and they were so the show,” Romano, 63, said to UPI. He added that recasting Boyle and Roberts’ roles would not work.

“It’s so not the show then. We just don’t believe it would do the show justice or be good enough to do it,” Romano explained. “Not only that but one of the kids (Sawyer Sweeten) is gone also. So, I never say never, but I think it’s ‘no.’”

Romano has sought to recreate the “Friends” reunion special that aired on HBO Max.

“I’ve pitched to now a couple of different places. We can do a reunion special. We can tell stories of the things that have happened to us at home, and then show a clip of the ‘Raymond’ episode, and I think it will be entertaining and funny and you’ll get a chance to catch up with the cast as they are now,” Romano said on “Pop Culture Spotlight with Jessica Shaw” on SiriusXM.