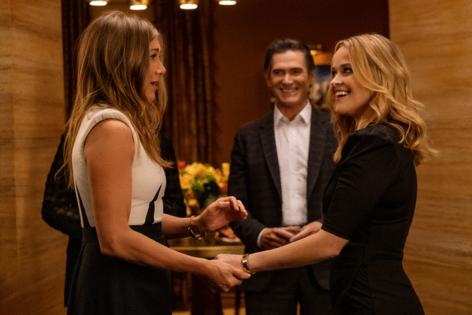 Ratings are down and network stock shares are sliding in Season 2 of "The Morning Show," Apple TV+'s hourlong drama set inside the cutthroat world of one of America's most popular a.m. news shows. The program is still reeling from a sexual misconduct scandal involving its former star host, Mitch Kessler (Steve Carrell), and the suicide of the young staffer he preyed on, Hannah Shoenfeld (Gugu Mbatha-Raw).

Season 2 of the series, premiering Friday, continues to weave its dog-eat-dog newsroom narrative around thorny #MeToo matters but now adds the presidential election, the COVID-19 pandemic and the racial reckoning that contributed to one of the wildest news years ever to create a chaotic mix of topical satire and pressure-cooker entertainment.

It's best to watch, and possibly rewatch, the Season 1 recap before jumping back into "The Morning Show," though, because the combination of a sprawling ensemble, rapid-fire plot elements and time-jumping can get confusing. Duplicitous network exec Cory Ellison (Billy Crudup) is terminated by the UGA board in the opening moments of the new season, and then we travel three months back in time to find out why.

The narrative picks up during the last days of 2019. Kessler's onetime co-host, Alex Levy (Jennifer Aniston), has been writing a memoir since resigning on air and exposing the rotten and permissive newsroom culture that allowed men like Kessler to excel and left women like her fighting for their jobs and integrity. She became a feminist icon after her frank public admission, but privately, she's racked with guilt. What could she have done to stop the deadly turn of events at the network, and what else happened that we don't know about yet?

Kessler's replacement, the wily Bradley Jackson (Reese Witherspoon), is now hosting "The Morning Show" with Eric Nomani (Hasan Minhaj). Ellison, who is overseeing news operations, senses he's in danger of losing his sleazily won position if he doesn't boost viewership. He pleads with Alex to return, promising her the moon — and autonomy. She acquiesces and brings executive producer Chip Black (Mark Duplass), who was sacked during the Kessler fallout, back in with her.

Bradley is furious that Alex is back, and as a she-hero no less, so the pair's rivalry reignites. Meanwhile, the disgraced Kessler is hiding out in an Italian villa, plagued by the shame of his actions and the bevy of network scandals in his wake, including a lawsuit filed by Hannah's family.

Marcia Gay Harden returns as the investigative reporter whose book on the those scandals threatens to tarnish Alex's golden reputation, and new on the scene is Julianna Margulies' seasoned news anchor Laura Peterson, who's initially tasked with interviewing Alex and Bradley about their renewed on-screen partnership and soon becomes embroiled in the drama herself.

It's another tumultuous ride through a dysfunctional and dirty workplace, and as in Season 1, "The Morning Show" — which can be stressful and heavy-handed — won't be everyone's favorite. Last time around, women appeared to connect with it more than men, likely because it took the time to unpack what it means to be a woman in a position of power, in front of and behind the scenes. It also grappled with difficult questions about sexual misconduct — should abusers have a path back to redemption? — and gave its abuser a backstory designed to complicate the picture.

Season 2 again enters territory that is frequently too fraught to dissect in public without triggering knee-jerk responses — with all the risks that entails. And whether it holds together as the world falls apart is an open question. But "The Morning Show" most definitely succeeds at striking the balance between advancing its own personality-driven narrative and tackling topical issues in one entertaining drama.