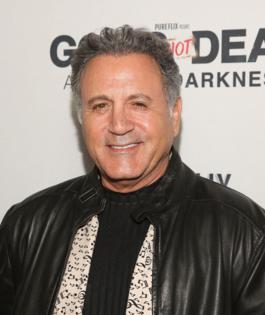 Norm Macdonald was a fearless comedian, known for his brutally honest jokes about a host of celebrities, including O.J. Simpson and Michael Jackson. But the butt of many of his jokes also happened to be one of his biggest fans.

Who? You guessed it, Frank Stallone.

Macdonald, who died Tuesday at 61 after privately having cancer for nine years, developed a habit of mocking Stallone with an odd non sequitur during his time hosting “Weekend Update” on "Saturday Night Live." The reoccurring bit — always with Stallone as the punchline along with a photo from his self-titled 1984 album — often evoked confused laughter from the studio audience.

Stallone, a former Philadelphia resident and the younger brother of actor Sylvester Stallone, told The Inquirer the jokes came out of nowhere. He had never met Macdonald, and first heard about the bit when people started approaching him in the street.

“I realized it was really fun. He wasn’t really attacking me, it was just randomly thrown in there,” Stallone said. “That’s what made it funny, because it made no sense — nuclear war, then putting my name in there.”

Macdonald repeated the gag for years, then it suddenly disappeared. During a 2016 interview promoting his book "Based on a True Story: Not a Memoir," Macdonald claimed he agreed to stop doing the segment at the request of Sylvester Stallone when he hosted "Saturday Night Live" in 1997.

“He told me, ‘The thing with Frank is after 'Rocky,' he decided to become a boxer. So he’d go in the ring, and it’d say the Italian Stallion’s brother, and every boxer in Philadelphia just beat the s— out of him,’” Macdonald recalled. “He goes, ‘He’s never been right since, and I feel guilty about it, so if you could just lay off him for a while.’ So I never did another joke.”

Stallone said the part about boxers wanting to take him down because he was Rocky’s brother was true. He was born in Maryland, but moved to Philadelphia in the late 1950s after his mother and father divorced. After attending Lincoln High School, he became an amateur boxer in Trenton, and was fighting regularly at the Trenton Police Athletic League center when "Rocky" was released in 1976.

“When 'Rocky' came out, everybody wanted to kick my ass. It was almost like a badge of honor,” Stallone said. But he doubts his brother would’ve told Macdonald to stop making fun of him.

“My brother probably thought it was funnier than I did,” Stallone said.

Stallone never had the chance to meet Macdonald, and his one regret is that he wasn’t able to appear on "Saturday Night Live" alongside the comedian to show he was quietly happy to be the butt of his jokes.

“He was very brave as a comic, and that’s what I enjoyed about him. And other comedians loved him,” Stallone said. “When you have love and respect from your peers, that really kind of shows who you are.”

On Tuesday, famous comedians all over the country rushed onto social media to pay their respects. David Letterman called Macdonald “a lifetime Cy Young winner in comedy,” while Conan O’Brien said he was “relentlessly and uncompromisingly funny.”

“No one could make you break like Norm Macdonald,” Jon Stewart wrote on Twitter. “Hilarious and unique.”

Appropriately, one clip shared by many comedians Tuesday was a moment from Macdonald’s 2011 Comedy Central stand-up special, "Me Doing Stand Up," where he complains about the idea of “battling” cancer.

“I’m not a doctor, but I’m pretty sure if you die, the cancer also dies at exactly the same time,” Macdonald said. “So to me, that’s not a loss, that’s a draw.”