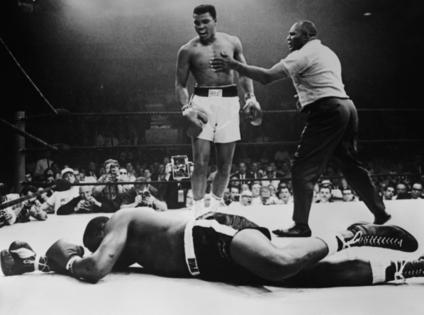 We remember Muhammad Ali as the Greatest. But there was a time when much of America hated his guts. To his dissenters, he was too cocky, too pretty, too Muslim, too Black. His journey from outcast to idol is at the heart of "Muhammad Ali," an eight-hour documentary premiering Sunday on PBS.

Like the rest of Ken Burns' projects, it has a lot to say about our country.

"What we are always drawn to are very, very complicated stories that are engaged in an essential American-ness, whatever that is, and we pursue it," the acclaimed director said last month during a virtual news conference. "No one could be more important to the exploration of that question than Muhammad Ali."

The four-part series includes familiar milestones like the "Rumble in the Jungle" match in Zaire where he famously beat George Foreman, his comedy routines with Howard Cosell and the lighting of the torch at the Atlanta Olympics.

But you may get thrown for a loop by the chapters in which Ali's religion and refusal to go to Vietnam got under people's skins. Newspapers kept referring to him as Cassius Clay long after he had changed his name. He was booed — and not just by white spectators.

"There's a certain section of Black people that loved Muhammad and another that despised him," said actor and former heavyweight champion Michael Bentt, one of the most eloquent voices in the film. "When you achieve something and you're in the spotlight, then have a challenge, people hate you because they can't do that or they would fold under the pressure of trying to do that."

Some of the most jarring scenes in the documentary deal with the years Ali was not allowed to fight and just how close he came to going to jail.

When Ali was in the ring, he was a powerhouse. I previously doubted the idea that he was truly the greatest of all time. Now I'm not so sure.

There's a good chance you've seen key moments from the brutal "Thrilla in Manila" fight. It's less likely that you've seen footage of his 1965 bout against Floyd Patterson, hitting his opponent just hard enough to keep him on his legs so he could continue to punish him. There are also highlights from the 1966 fight against Cleveland Williams, which many experts believe was Ali's finest moment.

"That's his Picasso. His Baryshnikov. That's Miles Davis," Bentt says in the documentary. "That kind of artistry will never be seen again."

David Remnick, longtime editor of the New Yorker, reflects on the Ali of the '70s, when the boxer was slower and more vulnerable. He may not have been a better boxer, Remnick argues, but he was a better story. That's when we really fell in love with Ali.

It couldn't have been easy for Rasheda Ali to watch the parts of the film that deal with her father's ugly treatment of Joe Frazier, the cruel way he disowned Malcolm X and his constant womanizing. But Burns and co-directors Sarah Burns and David McMahon dedicate much of the fourth hour to Ali's quest for redemption.

In many ways, he changed as much as America did.

"Daddy is a good-spirited person, but he made mistakes and my dad always owned up to his mistakes," Rasheda Ali said during the news conference. "He was just always evolving."

A quarter century after the mysterious masked murderer known as Ghostface first slashed his way through a California high school, horror fans are still “Scream”-ing for more.

LOS ANGELES — For years, Billy Crudup wasn't interested in the song-and-dance of the Hollywood promotion machine. So deep was his aversion to it that he tells a story, in the few interviews he's done, about trying to ...Read More

"The Suicide Squad": Director James Gunn, who helmed "Guardians of the Galaxy," turns his attention to DC's chaotic ...Read More

With social media and ticketing websites, such as Ticketmaster, you can easily get passes to sports games, concerts, festivals and shows right at the tip of your fingers. But this convenience leaves room for scammers to ...Read More

There has been no shortage of scares over the last couple of years.

Most of them, of course, came from the real world — as COVID-19 put all of us, to some degree or another, in very real danger.

There’s a lengthy argument halfway through the new season of “Succession” about whether or not the Roy family can live without their private jets.

It’s a ridiculous argument, one that is unrelatable to almost ...Read More