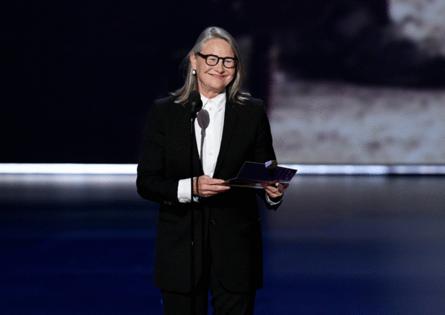 "I must a­pol­o­gize. I'm hope­less with dia­lects," said Jones, even be­fore be­ing asked about her ac­cent in "The Eyes of Tam­my Faye," which opens today and in which she plays the moth­er who raised fu­ture ev­an­ge­list Tam­my Faye Bak­ker in International Falls, Minn. "I'm ab­so­lute­ly not the per­son to ask [about that dia­lect], clear­ly. I'm from Ten­nes­see and I did the best I could."

The vet­er­an stage ac­tor's ac­cent sounds fine, in­ci­den­tal­ly, subtler than, say, the "Fargo" brand of the Minnesota sound. But it's very on-brand for the two-time Tony Award win­ner ("Doubt" and "The Heir­ess") to under­play her skill.

Al­though she's been act­ing for more than four de­cades, movies are still rel­a­tive­ly un­fa­mil­iar for the woman who of­ten plays peo­ple from Yan­kee stock with strong mo­ral back­bones. You could ar­gue she's in a sim­i­lar vein as Kath­ar­ine Hep­burn but it's tell­ing that Hep­burn only played mov­ie leads and Jones has nev­er played one.

As a re­sult, she may be the great­est ac­tor that mov­ie fans bare­ly know. In New York, she's spoken of with hushed rev­er­ence. Both of her Tony Award-winning roles are a­mong the finest stage per­form­an­ces I've seen but, in the movies, she's li­a­ble to pop in for a scene or two as a pres­i­dent's wife (El­ea­nor Roo­se­velt in "Amelia") or a singer's mom (in the Hank Williams biopic "I Saw the Light").

They may not be great parts but Jones' de­tailed and at­ten­tive act­ing makes them seem great. Her char­ac­ters are al­ways in­tel­li­gent, in­clud­ing a lot of au­thor­i­ty fig­ures, not just as first lady but also as president on "24," vice pres­i­dent in "The Bea­ver" and a ty­coon on HBO's "Suc­ces­sion." There's grav­i­ty and forth­right­ness in Jones. Some say act­ing is lying but when she speaks, every word is believable.

When told her char­ac­ter feels like the heart of "Tam­my Faye," Jones is mod­est.

"She is such a tough­ie. I'm amazed any­one could come away feel­ing that way but I'm hap­py be­cause I do think she's lov­ing," said Jones, while as­sem­bling a to­ma­to/bean sal­ad for a gath­er­ing of the cast of up­com­ing min­i­se­ries "Five Days at Memorial."

If you go to "Tam­my Faye," you'll want to see more of the ac­tor, which hap­pens a lot. She's not the star of any of the following movies. But think of her, in­stead, as the cherry on top.

Your favorite television guilty pleasure is back and just as deranged as ever.

It's been almost two years since Netflix's "You" returned for a second season that managed to be even more depraved than its predecessor. From...Read More