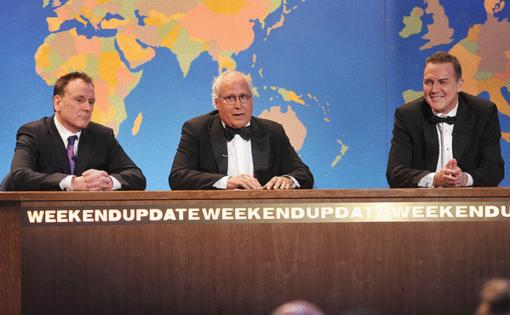 Norm Macdonald, the comedian, died Tuesday at age 61, from cancer; he had been dealing with it for several years without letting many people know, which seems in character for a person who came across on television, in movies and on podcasts as private yet unguarded, a regular guy in the form of a question mark. "You're weird," Jane Fonda said when she guested on his 2018 Netflix series "Norm Macdonald Has a Show," which is only to say he was very much himself, a thoughtful person whose thoughts led him into places not everyone would find familiar or comfortable.

He was not a comedian who used the minutiae of his life as a subject, at least not in any way that might be accounted reliable. Most comics deliver a mixture of fact and fiction, of course, but Macdonald especially liked to play with the tension between them. He could make it hard to tell just where autobiography ended and the bit began, whether the bit was taking you to some sort of real-life revelation or whether the personal anecdote was all just a bit. He referred to his self-referential 2016 "Based on a True Story: Not a Memoir" as "a novel" and told Larry King, "It's not facts, but it's truth."

Clearly he was not the ill-informed dummy he often made himself out to be, ignorant of current events — indeed, there was something deceptively cerebral, even conceptual about his humor, even as it might edge toward the cornpone, as in the long, involved, digressive shaggy dog stories that were a hallmark of his talk show visits. "Is this a true story, or is this one of your 'he has a farm and a goat comes by [stories],'" Conan O'Brien asks him in a 2016 appearance, as Macdonald launches into a typically circuitous, lighter-than-air anecdote about Donald Trump.

For a 2008 Comedy Central roast of his friend Bob Saget, Macdonald took the producer's instruction to be "shocking" by badly delivering gentle bad jokes out of a book intended to punch up speeches at retirement parties, a book his father had given him when he first set out to do comedy. To guest Cloris Leachman: "You'll never be over the hill, not in that car you drive." About Saget: "Bob has a beautiful face, like a flower — a cauliflower. … He thinks the English Channel is a TV station and not a body of water separating England and France." It's the kind of thing one might expect from a Steve Martin or Andy Kaufman, with more obvious irony. But there is something sweet and beautiful and deliciously confusing about Macdonald's untelegraphed approach. He's killing on the dais and dying in the room.

Comedy is a business of exploration that invariably leads to those precincts labeled "Here be monsters" on the old maps. (Good comedy does this as well as bad, but the bad comedy taints the good.) If you care to comb through Macdonald's well-documented years before a microphone, as performer and citizen, you can selectively find yardarms from which to hang him, but a preponderance of the evidence, as they say in the procedurals, can only lead one to believe that he was a compassionate person trying to be a better one. "Of course there's ... lines," he told Marc Maron on a 2011 episode of Maron's "WTF" podcast. "You're a human being, hopefully. … When I was on 'SNL,' on '[Weekend] Update,' you start to read newspaper articles [for material] and forget that they're people." After the effect of a joke about a death on the Brooklyn Bridge was brought home to him, he quit doing jokes about "private citizens" — which left him some significant public figures to play with.

Just after he was kicked out of "SNL's" anchor chair, in 1998, he appeared on "Late Show With David Letterman." The theory already in circulation was that NBC higher-up Don Ohlmeyer had him removed because of his constant jokes about O.J. Simpson, during and after his murder trial, which amounted to Macdonald saying over and over again, "He did it." ("Well, it is finally official: Murder is legal in the state of California" was how he greeted Simpson's acquittal.) You can find these jokes strung together in a long batch online, and some are good and some are bad, but they all amount to a person not backing off from what he clearly believes.

Offended on his behalf, Letterman attempted to stoke his anger. But Macdonald was circumspect, philosophical.

"This weasel fired you."

The non-melodic, softly percussive quality of his speech often led to him being described as deadpan, but it was a useful tool, an anvil against which he could strike both the awful thought and the whimsical notion — an instrument that gave his best work a complex quality of kidding/not kidding. There is a childlike cast to his humor, by which I don't mean childish — though he could certainly seem at times like a bad boy pleased to be getting away with something, if not always getting all the way away with it. (One of the things he liked about "SNL" was that it was one of the few places on television a joke was allowed to bomb.) I mean, rather, a kind of playfulness based in a sense of wonder. In a key moment in his childhood, he told Maron, a time when "I was very very very shy and afraid of everything," he was sent to accompany a blind friend of his father's to the store and asked to describe everything. "Instead of always looking inward … I was looking outward," he recalled, and things suddenly seemed "hilarious."

Never a physical comedian — "I used to be frozen onstage," he told Maron. "I still don't take the mike out of the stand" — Macdonald grew even more reflective, if no less provocative, with age. "People are under the misapprehension that their life is a motion picture, that it will be remembered as such. But it's not. It's just a photograph, you know. A still photograph." That this is leading to a punchline about autoerotic asphyxiation does not obviate its profundity.

He was not an angry comic but there was nothing cuddly or the least ingratiating about him. ("You were more admired than loved," "Saturday Night Live" producer Lorne Michaels said, guesting on "Norm Macdonald Has a Show.") But he was interested in spiritual things, describing himself with characteristic caveats variously as "a person of faith," a Christian and "sort of half religious, half not." ("Do you believe in the hypostatic Jesus?" he asks Fonda, without specifying whether he does or not.)

Age, and living with cancer, may have only increased his Canadian propensity for self-deprecation — or, better said, for looking outside himself. "Nothing I have said really is of substance," Macdonald says near the end of a brilliantly funny 2017 Netflix stand-up special. "Like, most of my act is just, you know, uh, gossip and trickery. … Like some cheap magician. So I'll tell you the only thing I know for a fact, and it's something we all know. … The only really true thing is that we all must love each other." And then he goes on to a bit about how much Hitler's dog must have loved Hitler. ("This is why we ask that you don't use recording devices," he interrupts himself to say.) The title of the special is "Hitler's Dog, Gossip & Trickery."