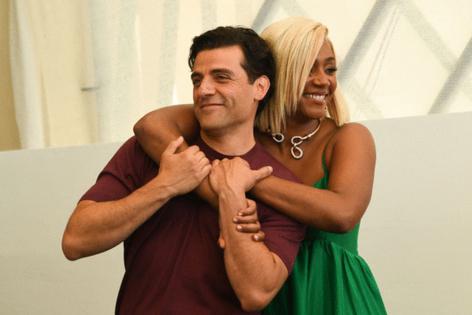 LOS ANGELES — For nearly 50 years, writer and director Paul Schrader has been unsparingly examining the dark side of human nature. From the screenplays to “Taxi Driver” and “Raging Bull” for Martin Scorsese to his own films as director such as “Hardcore,” “American Gigolo,” “Light Sleeper” “Affliction” and “First Reformed,” Schrader has gone right for the dark heart inside of men and swallowed it whole.

His latest film, “The Card Counter,” now playing in theaters, stars Oscar Isaac as William Tell, a gambler existing in something of a self-imposed purgatory, drifting between small-stakes casinos and anonymous motel rooms. He was a guard-turned-torturer at Abu Ghraib prison and even after having fulfilled his jail sentence for those crimes, he still feels the weight of an accrued karmic debt he may never be able to pay off.

A manager named La Linda (Tiffany Haddish) takes an interest in him as a player and perhaps more, while William also intersects with Cirk (Tye Sheridan), the son of a soldier William served with. Whether William will allow himself to move forward is a source of tension throughout the film.

Schrader and Haddish participated in a recent virtual screening event for The Times, where the filmmaker addressed what draws him back to the harrowing material of his grim morality tales.

“Contradiction is the heart and essence of character,” said Schrader. “You know, ‘I loved her so much I hit her.’ That’s character. ‘So much I hit her again,’ that’s even more character. And so you’re always looking for people who act and think in contradiction, and so you’re always driven to the darker side because people try to portray themselves as one thing when in fact they’re something else and vice versa. So I don’t see it as dark characters, I just see them as typically complex and contradictory as we all are.”

At the end of the film, William Tell is in prison and La Linda comes to visit him. Separated by the glass of a visitor’s booth, she puts her finger up to the glass that separates them and he matches her gesture. Though their fingers cannot fully touch, they are connected.

That image of two people who fate keeps apart separated by a jail cell is one Schrader has used before in “American Gigolo,” starring Richard Gere and Lauren Hutton, and “Light Sleeper,” starring Willem Dafoe and Susan Sarandon. It has its origins in Robert Bresson’s 1959 film “Pickpocket,” which Schrader has referred to as “the most influential film in my creative life.”

Schrader was raised in a strict Calvinist household and reportedly did not see a movie until the age of 17. Initially a film critic before he turned to moviemaking, he published the book-length study “Transcendental Style in Film: Ozu, Bresson, Dreyer” in 1972.

On what draws him back to the ending and imagery of “Pickpocket,” Schrader said, “It has this idea of returning to your cage. My background, you know, John Calvin referred to the human body as the prison house of the soul and this whole notion that your body is a prison and you need to escape it. Now I don’t believe that, but that’s how I was raised. So it’s not unusual for people who escape one prison only to go in search of a new one, because they’re not ever going to be home until they’re back in prison.

“So often it is with these characters — and as Robert Been, the songwriter, sings at the end, ‘just trying to find my way back home’ — and in [William’s] case prison is a metaphor for home. And that’s something I do quite often — use a thing how you don’t expect it to be. These are not typical poker players. Most people don’t think of prison as home. So if you do things like that — it makes people, it stretches their imagination.”