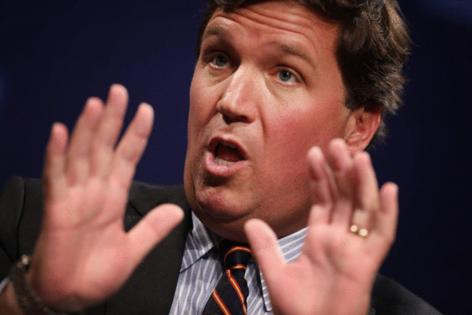 NEW YORK — Fox News superstar Tucker Carlson is a liar — or so he says.

The primetime pundit appeared on a right-wing YouTube program Sunday in which he was asked to explain why, supposedly, anchors on other networks lie. In a refreshing moment of honesty, Carlson admitted the truth isn’t always his first option.

“I mean I lie if I’m really cornered or something. I lie,” he confessed. “I really try not to. I try never to lie on TV.”

When Carlson was sued for defaming an alleged Donald Trump paramour in 2020, a Manhattan federal judge ruled that indeed, his audience should know Carlson is “not stating actual facts.” Trump has denied that affair.

Carlson went on to explain he doesn’t like lying, but indicated that sometimes he has to do what he has to do.

“I certainly do it, you know, out of weakness or whatever,” he continued.

But according to the 52-year-old conspiracy peddler, his rivals at competing cable networks like CNN are “systematically” and deliberately lying to protect “the system.”

“Ok, who’s running the system? You’re lying to defend Jeff Bezos? Like, you’re treating Bill Gates like some sort of moral leader, like, are you kidding me?” he asked. “How dare you do that.”

He then claimed to be appalled by the way CNN covered MAGA-supporting teenager Nick Sandmann, whose video recorded exchange with a protester in Washington, D.C., in January 2019 led to the student being cast in a negative fashion that was misleading and required greater context. The network settled a lawsuit over the incident for an undisclosed amount.

“That shocked me,” Carlson said.

Hutchins, who was ...Read More

“There are no words ...Read More

HBO didn't provide screeners for Season 11, but it's safe to assume that creator Larry David won't let us down. Even at his weakest, David's discomfort has given us comfort. And if we ever needed ...Read More

“Rust” star and producer Alec Baldwin, who discharged the prop gun that killed the film’s director of photography and injured its director, says he’s “fully cooperating with the police investigation” into the ...Read More

"While the events of this story are fictional … These. People. Existed." So begins "The Harder They Fall," with an intriguing setup and enough jarring punctuation to drive home that you're watching (ahem) a period ...Read More