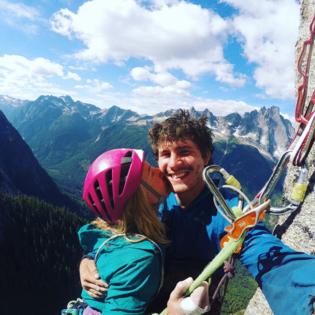 After the accident, Brette Harrington didn't know if she'd ever return to the mountains. She just wanted to disappear.

Before that day in 2018, when her boyfriend Marc-André Leclerc was fatally swept away by an avalanche, they had talked about a worst-case scenario.

It was a necessary evil they'd had to imagine, given the risks they took scaling snowy peaks in the remote wilderness, often without ropes to stop a fall. This was how they'd fallen in love. Leclerc, a freakishly accomplished young alpinist, taught Harrington — previously a rock climber — how to traverse dangerously unpredictable terrain.

And he was always clear: If he died, he wanted Harrington to keep climbing.

She wasn't there when it happened, but she worried that revisiting routes they'd ascended together would only compound her grief. And at first, it did; she saw Leclerc everywhere. But then, the mountains became the only place she could be: "Climbing like that is so intense that it pulls you out of the headspace that you're in," Harrington recalled. "Almost like a survival instinct. I used climbing to escape the pain."

Which is why now, nearly four years after the death of her partner, Harrington is struggling with the release of "The Alpinist." The documentary, which is now playing in theaters with plans to expand in the coming weeks, tells the story of Leclerc's life and death at age 25. Like 2018's Oscar-winning "Free Solo," the film focuses on a twentysomething preternaturally gifted climber with high fear tolerance. Alex Honnold, the star of "Free Solo," actually knew Leclerc and is in "The Alpinist," describing his own adventures — like getting up Yosemite's 3,000-foot El Capitan rock wall using only his hands and feet — as "safe" compared to his late friend's.

A romantic partnership is also central to both men's stories. In "Free Solo," Honnold wrestled with continuing to test the limits as he embarked on a new relationship with a woman who wanted marriage and kids. In "The Alpinist," Leclerc explored the outdoors alongside Harrington, their shared passion for the sport deepening their romance.

Accordingly, Harrington — now 29 — is a big part of the movie. The documentary, co-directed by Peter Mortimer and Nick Rosen, began filming six years ago. It was supposed to premiere at SXSW in March 2020 — then at the Telluride Film Festival later that year — but both events were canceled due to COVID-19. In the interim, Harrington said she's slowly started to process Leclerc's death. She's even dated a couple of guys, though nothing serious. So watching the film has brought her back to an emotional space she isn't sure she wants to return to.

"There's been this strange delay with the movie, and now it's all pulling me back into the past," said Harrington, FaceTiming outside from Sun Valley, Idaho, where she was on a climbing trip. "It's so hard to watch the film. I just cry because it's so sad and because I usually don't force myself into thinking about him."

Leclerc and Harrington had been dating for about two years when filmmakers approached them about being a part of "The Alpinist." They met in 2012, when Harrington was a novice climber. She'd grown up skiing at a boarding school in New Hampshire but transitioned to climbing after breaking her neck at 20. While in college in Vancouver, she'd travel the 45 minutes to Squamish — a famous British Columbia climbing spot — to explore the rocks.

So much storytelling in popular culture, musical theater included, relies on the narrative usefulness and emotional exploitation of the delayed secret. And “Dear Evan Hansen” would be nothing without it.

Films that portray the brutality behind the beauty of ballet have become a subgenre unto their own. From The Archers’ romantic and tragic melodrama “The Red Shoes,” to Dario Argento’s gleefully witchy giallo ...Read More

DON'T MISS: "The Tony Awards Present: Broadway's Back! — "Hamilton" star Leslie Odom Jr. hosts a lively concert special celebrating the joys of live theater and the reopening of Broadway. Among the stars appearing at New...Read More

The top 10 DVD rentals at Redbox kiosks for the week of Sept. 13: