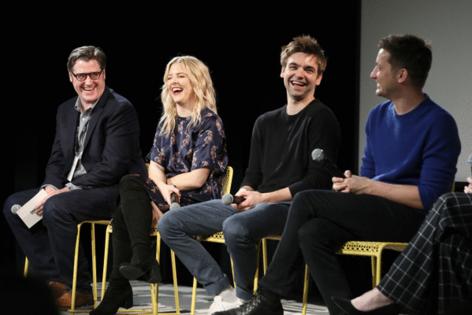 Sometimes there are just too many shows in the streams of content being pumped out of every service. What’s good? What’s fun? What’s worth your while? Rather than submitting to an endless scroll or risking your time on a dud, sometimes the best course of action is to turn to the tastemakers on Twitter to see what they’re watching and enjoying.

I put out the call for streaming suggestions on Twitter, and folks turned up some excellent ideas. So if you’re in need of a content refresh, and you haven’t yet caught up with these, consider this your nudge to do so.

First, the new series “Reservation Dogs” on Hulu has been taking Twitter by storm (director Barry Jenkins raved about it). Produced by Taika Waititi and created by Sterlin Harjo, this dark comedy was shot on location in Oklahoma with a predominantly Native American cast and crew. “Reservation Dogs” follows a group of four Native teens passing the time with petty crime. And yes, the title is a reference to the Tarantino film.

Another favorite suggested selection is also on Hulu, the series “Only Murders in the Building” starring Steve Martin, Martin Short and Selena Gomez. This Manhattan-set true crime parody follows a trio of neighbors in an Upper West Side apartment building who are obsessed with the same crime podcast and suddenly find themselves wrapped up with one of their own.

Season 1 of the very funny series “The Other Two" aired on Comedy Central, but now the series has moved to HBO Max for the highly-anticipated Season 2 (the first season is also available to stream there). Written and created by two former head writers for “Saturday Night Live,” the sharp, silly and hilarious series takes on fame in all forms, as two siblings with big dreams (Drew Tarver and Helene Yorke) learn to deal with the sudden viral fame of their younger brother, who becomes a teen heartthrob on social media. In Season 2, it’s their mother, Molly Shannon, who becomes famous as a talk show host. Give it a spin if you haven’t yet.

Also widely suggested on Twitter: the Netflix series “Brand New Cherry Flavor.” Created by Nick Antosca and Lenore Zion, this limited series stars Rosa Salazar and Catherine Keener in a dark, witchy, neo-noir set in the Hollywood of the 1990s.

If you’re all caught up on these series, no need to worry, there’s more content dropping by the week. Check out the chemistry between Oscar Isaac and Jessica Chastain in the HBO Max limited series “Scenes From a Marriage,” adapted from the Ingmar Bergman film by Israeli filmmaker Hagai Levi. The first episode premiered Sunday. Also coming to Hulu this week (it dropped on Monday) is “Y: The Last Man” a hotly anticipated adaptation of the comic book series by Brian K. Vaughn and Pia Guerra. Ben Schnetzer stars in this post-apocalyptic thriller as Yorick, the only man left on earth after a mass extinction event kills all living mammals with the Y chromosome. Diane Lane co-stars.