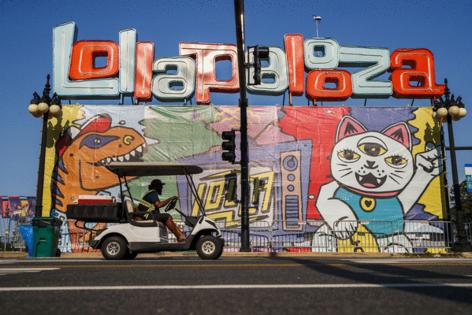 CHICAGO — When the Foo Fighters finish their set on the main stage at Lollapalooza on Sunday night in Grant Park, it will mark the end of the final festival under a 10-year contract between promoter C3 Presents and the Chicago Park District.

Typically, at the end of the raucous four-day, eight-stage, 400,000-person production at Grant Park, Lollapalooza organizers announce the dates for next year’s festival. It’s unclear whether that will happen this year as the contract between the festival and the city is set to expire at the end of the year.

So far, there has been no public talk of relocating one of the world’s largest music festivals from its iconic downtown Chicago location.

Mayor Lori Lightfoot allowed this year’s festival and its 174 bands to move forward at full capacity despite criticism from some that it should be curtailed amid an uptick in COVID-19 cases. Attendees are being asked to produce proof of vaccination or a negative COVID-19 test within 72 hours.

Last year, the Chicago festival was canceled amid the pandemic and held online instead, but Lollapalooza organizers were still required to pay the Chicago Park District $750,000 under their contract.

C3 Presents, which is based in Austin, Texas, and puts on the Austin City Limits Music Festival there among other events around the country in addition to Lollapalooza, declined to answer questions about the status of contract negotiations with the city. The promoter did, however, release a brief statement expressing support for Chicago as the home of Lollapalooza since 2005.

“Our partnership with the city of Chicago and Chicago Parks has been incredible,” said Sandee Fenton, the director of communications for C3 Presents. “We look forward to growing our partnership for years to come.”

Officials for the Chicago Park District also declined to answer questions about the negotiations, but released a brief statement indicating unspecified improvements to Grant Park would be part of the talks.

“The city of Chicago has had great experience with C3 each year they produce the Lollapalooza festival,” Park District spokeswoman Michele Lemons said in a statement. “We look forward to our continued partnership and enhanced improvements to Grant Park that will make the experience even greater for Chicagoans and patrons alike.”