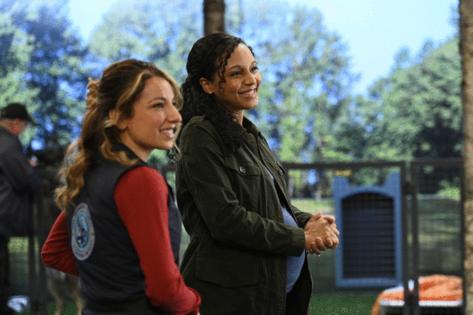 Atlanta actress Carra Patterson plays a sidekick in more ways than one in the new Disney+ show “Turner & Hooch,” inspired by the 1989 Tom Hanks film of the same name.

Patterson’s character Jessica is the police partner to Scott Turner (Josh Peck of Nickelodeon’s “Drake & Josh” fame) and his dog Hooch, a Dogue de Bordeaux breed. The concept is simple: man and dog solve crimes together.

“The dog totally steals the show.,” Patterson admits. “It’s Hooch’s show. We are all aware of that. We know what we signed up for. There are actually five dogs. We got to spend time training with them so we could be familiar with each one. They each have different skills. I got to see their different personalities and I could guess which dog was which.”

She said it was fun to bring back the film in TV form. “That was such a timeless film,” she said. “This creative team kept many of those same elements: the heart, the action, a little romance and comedy. This is a show that works as the world is opening up. The whole family can watch it together.”

The series, which was shot in Vancouver, British Columbia, is available now on Disney+.

Here are some excerpts from my talk with Patterson:

Who inspired her into acting: Tammy Staten Daniels, her high school drama teacher. Patterson watched a performance of Ntozake Shange’s theater piece “For Colored Girls Who Have Considered Suicide When the Rainbow Is Enuf” and “it opened my eyes. I didn’t know there was such material that gave voice to such strong Black women. I hadn’t seen a play before. I would do monologues from that play. Dr. Daniels would enter me in monologue competitions throughout high school.”

Getting the acting bug: She continued to pursue acting while attending Georgia State University. “I got blinded by the Hollywood lights as an undergrad. I wasn’t that great a student. I was expecting my big break. I’d skip classes and go on open calls.” She put together a showcase with seven other students and caught the attention of Jody Feldman, Alliance Theatre casting director. She later went to New York University for an acting grad program.