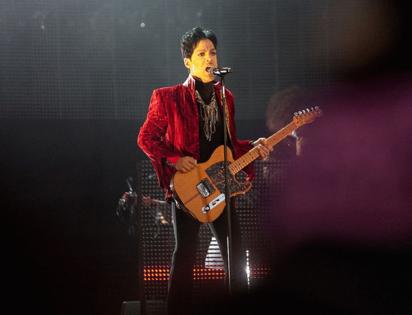 Is Prince speaking to us from beyond? Was he some kind of soothsayer? Or have times just not changed that much?

Five years after his death, the Purple One weighs in with an 11-year-old, previously unissued album that seems remarkably timely and topical in this post-Trump world of media misinformation and racial reckoning.

Sony Legacy's release this week of "Welcome 2 America," a fully completed 2010 project discovered by the Prince estate's archivist nearly two years ago, surprises in many ways:

— There are more songs offering social commentary than on any previous Prince album.

— He recorded this collection primarily with two musicians he'd never worked with before.

— He included his first cover ever of a tune by another Minneapolis act, Soul Asylum's "Stand Up and Be Strong."

— A three-voice female choir sings lead on one selection and figures prominently on several others.

— Prince asked longtime sideman Morris Hayes to add keyboard parts on his own, giving him an unprecedented co-producer credit.

As with many Prince albums, "Welcome 2 America" contains the good, the meh and the "What was he thinking?" Despite its unevenness, this seldom-bootlegged album is a welcome addition to his official catalog, a record that shows a strong sense of purpose, vibrant spirituality and fervent hope for a better world. The music resonates with profound relevance in the post-George Floyd, current-COVID climate of 2021.

"Welcome 2 America" appears to be rooted in Prince's discovery of bassist Tal Wilkenfeld, then 23, in a YouTube video. After jamming with her in Los Angeles, he invited her to come to Paisley Park with a drummer of her choice. She picked Chris Coleman, who had been playing on the New Kids on the Block reunion tour. He didn't even audition.