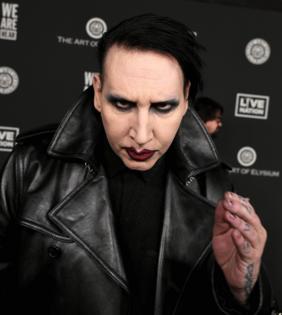 LOS ANGELES — Disgraced musician Marilyn Manson, who has been accused by several women of sexual assault and abuse, is trying to dismiss a lawsuit filed by "Game of Thrones" actor Esme Bianco accusing him of sexual assault, sexual battery and human trafficking.

In a motion filed Wednesday in a Los Angeles court and obtained Thursday by the Los Angeles Times, Manson — whose real name is Brian Warner — called Bianco’s allegations “untrue, meritless, and a key component of a coordinated attack by multiple plaintiffs, who are cynically and dishonestly seeking to monetize and exploit the #MeToo movement.”

The Los Angeles Times has reached out to Bianco's reps for comment. A representative for Manson declined to comment further.

In April, Bianco alleged that Manson raped and abused her while they dated in 2011. According to Bianco's complaint, Manson allegedly starved her, electrocuted her, chased her with an ax and beat her with a whip that he said was used by Nazis, among other acts of verbal and physical violence.

"For far too long my abuser has been left unchecked, enabled by money, fame and an industry that turned a blind eye," Bianco said in a statement upon filing the lawsuit.

"Despite the numerous brave women who have spoken out against Marilyn Manson, countless survivors remain silenced, and some of their voices will never be heard. My hope is that by raising mine I will help to stop Brian Warner from shattering any more lives and empower other victims to seek their own small measure of justice."

In addition to asserting that Bianco's allegations "bear no resemblance to reality," Manson's 12-page motion argues that the British performer and "her co-conspirators are desperately trying to conflate the imagery and artistry of Warner's 'shock rock' stage persona, 'Marilyn Manson,' with fabricated accounts of abuse."

Bianco is a proponent and co-creator of the Phoenix Act, a law that extends the time frame domestic violence survivors have to take legal action against their alleged abusers.

According to her April lawsuit, Bianco initially feared speaking out against Manson because of physical and psychological abuse, as well as the singer's connections to the entertainment industry.

Among the other women who have leveled allegations against Manson is “Westworld” actor Evan Rachel Wood, who co-created the Phoenix Act and claimed earlier this year that the “Antichrist Superstar” artist “started grooming me when I was a teenager and horrifically abused me for years.”

After Wood identified Manson as her alleged abuser, more women came forward with their own testimonies on social media. Manson has denied all of their claims.

Earlier this month, Manson was arrested for allegedly assaulting a videographer at a 2019 concert in New Hampshire. Police said the alleged assault was not sexual in nature. The Los Angeles County Sheriff’s Department is also investigating allegations of domestic violence involving the musician between 2009 and 2011.

No one has yet cajoled Tom Cruise into doing a TV series. But...Read More