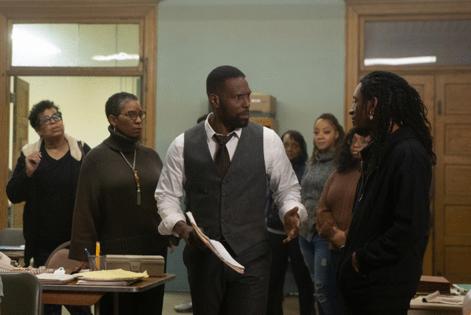 By any measure, hitting the four-season mark is a decent marker of success for a television show. But the Showtime drama “The Chi,” which airs its Season 4 finale Sunday, has been one of strangest examples of a series that started with so much promise, only to devolve into something almost unrecognizable from the show that premiered in 2018.

A drama rooted in realism (at least initially), the show set out to be a portrait of working class Black people on the South Side of Chicago. The pilot episode of Season 1 began with the shooting deaths of two Black teenagers, but as I noted at the time, this isn’t a crime show — not really: It was far more interested in why things happen and the effects that ripple out. How do these experiences shape a person’s state of mind? Their decisions? Their well-being? I was hooked.

Created by Chicago native Lena Waithe, comparisons to HBO’s “The Wire” were inevitable and not necessarily bad; that first episode of “The Chi” promised something serious-minded but also a series that understands all the ways that life can be absurd and strange and funny, even as we navigate stress and instability.

Characters like Ronnie (part elder statesman, part screw-up) and Reg (the charming if erratic drug dealer) were fixtures of the show’s fictional neighborhood, and that had the effect of giving the show a sense of place, even if the precise neighborhood was never specified. My colleague Will Lee and I have recapped every episode of the show since the beginning and our biggest criticism of that first season was the way it had little use or interest in developing its female characters.

Here we are, four seasons later and the show has absolutely improved on that front — the women of “The Chi” are three-dimensional people with their own lives, dreams and frustrations — but the show itself feels completely unmoored and I have no idea what kinds of stories it wants to tell anymore. Only a handful of characters from the first season remain, and the show’s focus on the texture of day-to-day life has been replaced with soapy narratives that ping around like a steel ball in a pinball machine. New characters are introduced, only to be sidelined. New stories are introduced, only to be abandoned. It’s baffling and it keeps you from becoming invested in any of it.

This season, drug kingpin Douda (aka Otis Perry, played with wonderful confidence by Curtiss Cook) is, improbably enough, the mayor of Chicago. One of his first big power moves: Defunding the police department.

This is a radical decision for any mayor, fictional or otherwise. And it’s the kind of big stakes citywide storyline that steers the show away from its initial small bore focus. But I was genuinely excited to see this play out, because the beauty of fiction is that it can show us how new ideas like this might work.

And yet “The Chi” has been weirdly reticent to actually go there. All we’ve seen are two well-meaning characters, with no prior experience in social work or policing alternatives, shouldering the burden of rethinking how to help people in crisis without relying on the police.

This is madness. It’s also irresponsible, reinforcing a perception nobody is ready with ideas if, and when, there is an opportunity to redirect police funds. “The Chi” doesn’t have to be a documentary, but shouldn’t it bear some resemblance to what’s going on in the real world, thanks to activist groups like GoodKids MadCity and others? Not all Black people support police abolition, by the way, where’s that debate?

Nine episodes into the season, I still have no idea why this narrative was introduced and I wonder if there are forces at the studio or network level that led to this watered down, scattershot approach to defunding the police.